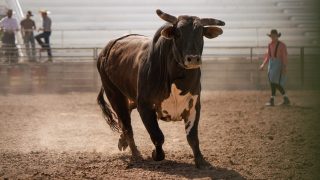 Video of downed bull with broken leg, struggling to get up, and being dragged from arena

FAIRFAX, VA — Following the release of video footage from a September 24, 2022 event at George Mason University’s EagleBank Arena depicting a bull severely breaking his leg and being dragged out of the arena, students with the Animal Legal Defense Fund GMU Law School Student Chapter are calling on University President Gregory Washington and the administration to ban the Professional Bull Riders from returning to the university.

During the Professional Bull Riders Challenger Series event, a bull fell to the ground immediately, crushing his back right leg, after exploding from the chute with a rider on his back. Video captured the injured bull trying in vain to stand, appearing to further fracture the leg, before collapsing helplessly to the ground. The bull was then dragged from the arena by a rope tangled around his neck and legs. The Animal Legal Defense Fund reported the incident to Fairfax County Police and George Mason University Police requesting a thorough investigation of the incident and a report of the outcome of the bull. 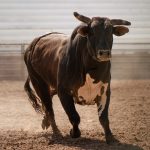 “The Professional Bull Riders rodeo and the animal cruelty that took place in the EagleBank Arena does not reflect George Mason University’s mission of creating a more just, free, and prosperous world,” says Animal Legal Defense Fund GMU Law School Student Chapter Vice President Rob Blizard. “It is imperative that we live our values and set an example of zero tolerance for animal cruelty on campus.”

The Animal Legal Defense Fund GMU Law School Student Chapter are circulating a petition on campus and online, asking University President Washington to ban the Professional Bull Riders from returning in light of the incident and based on George Mason University being a state school.

“To exaggerate bucking behaviors, bulls are prodded with spurs and tasers, and have a flank strap cinched around their sensitive abdominal area. This excessive bucking can result in broken legs and backs for the bulls, as well as serious injuries for the people in their path.” says Animal Legal Defense Fund Executive Director Stephen Wells. “Taxpayers should not be forced to subsidize, nor should the government endorse, inhumane treatment of animals such as Professional Bull Riders events and other exhibitions that involve abusing animals.”

Unfortunately, injuries like what this bull experienced are common in this industry. The horses, bulls, steer, and calves used during rodeo events may suffer broken ribs, backs, and legs, torn tails, punctured lungs, internal organ damage, ripped tendons, torn ligaments, snapped necks, and even death. Animals who are injured during events are typically killed or sent for slaughter.

The petition is available at aldf.org/NoRodeo.