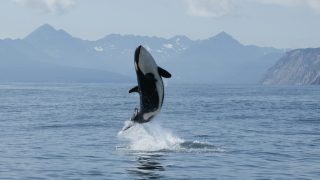 Despite growing recognition of the suffering that orcas endure in captivity, marine amusement parks like SeaWorld continue to profit off their captivity. A critical tool in the fight to end this cruelty is educating children about the realities of life in a tank.

To demonstrate how small an orca tank is, Heather gated off a small area and asked troop members to imagine living there for the rest of their lives.

A troop member and Heather Sierstorpff.

The troops proudly show off their handiwork.

Many of the posters encouraged amusement parks to “empty the tanks”!

This poster highlights the fact that captive orcas have much shorter lifespans than their wild counterparts.

The Animal Legal Defense Fund is working to end orca captivity by enacting legislation in Florida that would make it illegal to hold orcas in captivity for any purpose (grandfathering those already in captivity in Florida) as well as breed captive orcas. Learn how you can help animals in entertainment.