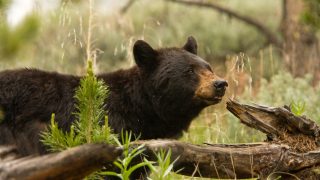 Estimated More Than 20 Percent of Population Lost in 2015

St. Petersburg, FL — Renowned scientists Drs. Stuart Pimm and Adrian Treves and over a dozen conservation and animal-protection organizations, including the Center for Biological Diversity and Animal Legal Defense Fund, today submitted a scientific petition to the U.S. Fish and Wildlife Service to protect the Florida black bear under the federal Endangered Species Act.

Habitat loss, roadkills and the first planned bear hunt in over 20 years made 2015 a deadly year for Florida black bears, with humans responsible for killing at least 590 bears out of an estimated population of 3,000 to 3,500.

“The Florida black bear almost blinked out of existence once on our watch,” said Jaclyn Lopez, Florida director at the Center for Biological Diversity. “Years of out-of-control sprawl have pinched the Florida black bear between roads and homes, threatening its long-term survival, but the Endangered Species Act can provide a roadmap to make sure the bear has a place in Florida’s future.”

The state’s largest land mammal, the Florida black bear once roamed widely throughout the Southeast. It now occupies only 18 percent of its original range, in seven highly isolated subpopulations.

Land-use decisions, hunting and human population growth cut the bear population from an estimated 11,000 to just 300 several decades ago. State protections helped bring bears back from the brink of extinction, but following state delisting and an ill-conceived hunt sanctioned by the Florida Fish and Wildlife Conservation Commission, the bear’s future is once again threatened.

“The Endangered Species Act exists to save imperiled species like the Florida black bear, which has become isolated in ever-smaller pockets of habitat,” said Stephen Wells, Animal Legal Defense Fund executive director. “At a time when the bear faces the threats of encroaching development, busy roads and a disastrous trophy hunt, the law must step in to protect this iconic species from an untimely demise.”

Outside of habitat loss, vehicle collisions have, for years, been the leading known cause of death of Florida black bears. The number of bears killed by vehicles has consistently increased from 33 in 1990 to 170 in 2014, peaking at 285 bear deaths in 2012.

With Florida’s human population expected to increase by nearly 50 percent by 2060, these threats will only worsen, as human development encroaches on the bear’s ever-shrinking habitat. Endangered Species Act listing and the designation of critical habitat for the bears would help alleviate the threats.

“Black bears are an iconic species, an essential part of our natural world: We need to ensure they remain that way,” said Dr. Stuart Pimm, Doris Duke professor of conservation ecology at Duke University and long-time Florida species and habitat researcher.

“Scientists have an obligation to speak up when agencies are not using the best available science to protect our wildlife” said Adrian Treves, associate professor at the Carnivore Coexistence Lab at the University of Wisconsin-Madison. “Florida back bears are a public-trust asset, and the state’s apparent mismanagement of the Florida black bear not only puts the bear at risk of extinction, but appears to violate state and federal public-trust obligations.”

The Everglades Law Center co-authored the petition. These organizations collectively represent the interests of more than 100,000 Floridians who care deeply about the Florida black bear and its long-term survival.