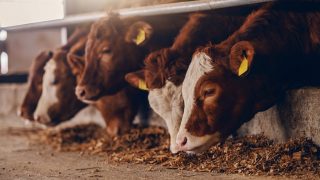 On Dec. 11, U.S. District Judge Kristine Baker granted a preliminary junction that prevents Arkansas from enforcing a law that prohibits producers of plant-based and cultivated meat (which is produced via cultured cells) from using “meat” terminology because their products do not come from slaughtered animals. This is a major victory for animals, for consumers, and for the rule of law.

This important decision comes in response to a lawsuit filed by the Animal Legal Defense Fund — in coalition with the American Civil Liberties Union (ACLU) and the ACLU of Arkansas, and the Good Food Institute, on behalf of plant-based meat producer Tofurky.

The lawsuit challenges the Arkansas law, enacted in 2019, as a brazenly unconstitutional attempt to protect the animal agriculture industry by thwarting free speech and the growth of plant-based products. Under the law, producers who sell products like “veggie sausage” or “turkey-style deli slices” could be penalized $1,000 for each product sold in the state.

These plant-based products, along with cell-based products that will be available in the future, are rapidly growing in popularity as humane and more ecologically-sustainable alternatives to slaughtered animal meat. Thus, they present a growing threat to the market share of meat products from slaughtered animals. The meat industry is attempting to use state legislatures to criminalize truthful speech and stifle competition under the guise of protecting consumers from alleged “confusion.”

However, as the court recognized in issuing the preliminary injunction, no evidence supports the claim that consumers are confused by plant-based meat products. The true aim of Arkansas’ law is to protect the animal agriculture industry by creating unconstitutional barriers to innovation by plant- and cell-based producers.

As Judge Baker wrote, “The State appears to believe that the simple use of the word ‘burger,’ ‘ham,’ or ‘sausage’ leaves the typical consumer confused, but such a position requires the assumption that a reasonable consumer will disregard all other words found on the label. That assumption is unwarranted… Additionally, ‘[t]here is no contention that any [consumer or potential consumer] was actually misled or deceived by’ Tofurky’s packaging, labeling, or marketing.”

Arkansas is not the only state to bow to pressure from the meat industry. In 2018, Missouri also enacted a law that prevents plant-based meat and cultured meat producers from using “meat” terminology because their products do not come from slaughtered animals. The Animal Legal Defense Fund has filed a federal lawsuit challenging Missouri’s unconstitutional law, as well.

Consumers have become increasingly aware that animal agriculture causes immense animal suffering, pollutes the environment, and threatens human health and welfare. We do not need to rely on this flawed industrial system. More and more Americans are choosing plant- and cell-based foods that eliminate the need to slaughter animals and cut out the cruelty, suffering, and pollution inherent in industrial factory farming. These slaughter-free options are expected to increase in popularity going forward.

The rise of plant-based and cultivated meat products carries great potential to reduce cruelty and spare millions or even billions of farmed and wild animals whose habitats are threatened by industrial agriculture. This is why the Animal Legal Defense Fund is working diligently to combat unconstitutional and anti-competitive laws intended to stifle this humane market.

We applaud Judge Baker’s decision to put enforcement of Arkansas’ unconstitutional law on hold, and we are confident that the animal agriculture industry will ultimately be unsuccessful in its efforts to stifle plant-based and cultivated meat products.