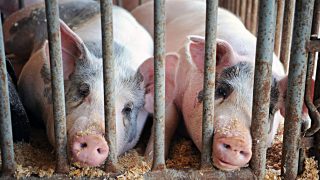 It’s bad enough that factory farms are able to harm animals and pollute the environment with near-impunity. It’s even worse when they commit these harmful acts using taxpayer-funded loans, but free of the usual safeguards and transparency required under federal law.

This week, a coalition of organizations, led by the Animal Legal Defense Fund, filed a lawsuit challenging a 2016 decision by the U.S. Department of Agriculture (USDA) Farm Service Agency (FSA) to exempt some factory farms from critical environmental laws.

The coalition argues that the exemption is not only dangerous to animals and the environment but illegal under two federal laws: the National Environmental Policy Act (NEPA), a landmark federal environmental law, and the Administrative Procedure Act (APA), a federal law that governs how federal agencies operate and regulate.

Factory farms are notoriously abusive for the animals they keep. For one example, the billions of cows, pigs, chickens, and other animals forced to live in these industrialized agriculture operations are often confined to spaces so small they cannot lie down or turn around, let alone engage in their natural behavior.

And if this sort of legal abuse is not bad enough, videos often emerge from these facilities of animals being kicked, stabbed, and tortured in other ways by the people who are supposed to care for them.

But it’s not only animals who suffer because of industrialized farming. So-called Confined Animal Feeding Operations (CAFOs) — the technical term for factory farms — are also notorious polluters, with huge impacts on the environment, public health and, of course, animals.

Despite their many negative impacts, the USDA, through the FSA, regularly provides taxpayer-funded loans to these operations. Loans have been granted for building new warehouses to hold chickens, cows, pigs, or even dogs used for breeding, as well as for building new manure management structures, and purchasing additional animals. Between August 3, 2016 and August 2018, the agency provided hundreds — if not thousands — of such loans across the country.

In the past, these loans have required a review of the environmental and public health impacts because the negative impact of factory farms on the environment and our communities is well-documented and immense, and because these reviews are required by federal law. Nevertheless, in 2016, the Farm Service Agency issued a regulation that exempts some of these operations — called “medium CAFOs” — from environmental review under NEPA.

This change was purportedly to make it easier for new farmers to enter the industry (though in actuality, it benefits large corporations, because most of the factory farms receiving this federal funding are subcontractors to massive agricultural conglomerates).

In other words they are massive facilities, and they do massive harm.

Polluting Our Communities, Jeopardizing Our Health

The huge amounts of waste generated by factory farms contaminates air, drinking water, and surface waters, impacting the health of both people and animals. Air inside the facilities is thick with ammonia and hydrogen sulfide gases, affecting the respiratory systems of the confined animals. To disperse the hazardous gases, factory farms use large ventilation fans, sending the fumes into the neighboring community.

These industrial agricultural facilities also compromise the quality of life for nearby residents who must contend with the intense stench of animal waste, decomposing animals, and air pollutants like ammonia. People who live nearby report odors so intense that they can’t spend time outdoors without their eyes burning.

Factory farms jeopardize public health far beyond their geographic locations. Animals living in these facilities are intensively confined in unsanitary conditions. Companies routinely dose “healthy” animals with antibiotics to induce growth and prevent the spread of disease. Widespread use of antibiotics in animals intended for food is fueling the development of antibiotic-resistant bacteria. Important life-saving drugs are losing their effectiveness, creating a global health crisis.

Due to the threats these facilities pose to the environment and public health, NEPA requires federal agencies like the FSA to conduct environmental reviews before granting loans to factory farms. The reviews measure the likely environmental impact of the activity that would be funded by the loan, possible alternatives with lesser impacts, and mitigation measures to lessen impacts, among other things.

There is also a requirement to notify local communities and the general public about new factory farms, and respond to concerns before moving forward.

Clearly a facility that houses upwards of 100,000 birds will significantly alter a community’s landscape. Yet the regulation eliminates an analysis of potential environmental impact, public notice, and an opportunity for feedback. In other words, the FSA is able to make significant loans using public money to these facilities, and the public has no recourse.

The purpose of NEPA is, in part, to “prevent or eliminate damage to the environment.” Removing an entire class of factory farms from its purview greatly undercuts the law’s ability to protect our environment. That’s why the Animal Legal Defense Fund has joined community rights and environmental advocacy groups in challenging the regulation in court.

Public records show that the FSA exempted more than 100 of the 130 loans to facilities in Indiana. Additionally, files obtained under the Freedom of Information Act show that the FSA provided loans to at least 100 “medium CAFOs” in Arkansas without completing environmental reviews.

This is the case for dozens of these factory farms in New York, and more than 10 in both Iowa and Kansas, as well. Some examples of projects funded with these loans include two new broiler chicken houses at a factory farm in Izard County, Arkansas; an expansion of a dairy factory farm to 699 cows in Franklin County, New York; and a new 2,480-pig factory farm in Dubuque County, Iowa — all facilities that technically qualify as medium CAFOs under the agency definition, but just barely.

Meanwhile, the FSA is undercutting the independent farmers it claims to support by granting these federal loans to factory farms that are, largely, subcontracting to large agribusiness conglomerates.

Additionally, the agency also failed to follow the rule-making process required by the APA, depriving affected parties such as actual small farm owners the opportunity to comment on regulations that will give their larger competitors an unlawful leg up.

Factory farms spill millions of gallons of animal waste into our rivers and streams, produce dangerous air pollutants, and are contributing to the formation of “superbugs” — dangerous antibiotic-resistant bacteria. The law mandates that a thorough environmental analysis be conducted before public funds are committed, and that the community has a chance to weigh in during the process.

These loans affect so many and so much. The use of public money to support them at the expense of rural communities, animals, and our environment should not be hidden from public view. Moreover, the FSA’s regulation exempting these factory farms from environmental review and public process is illegal. We are hopeful our lawsuit will return the transparency that is so desperately needed, and that is required under the law.