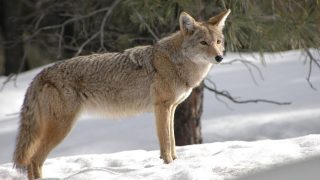 Jackson, WY — Animal protection and environmental organizations submitted a written request to the federal Bureau of Land Management (BLM) urging the agency to enforce its own regulations regarding two Rock Springs, Wyoming, coyote-hunting contests scheduled to take place in the coming weeks.

The purpose of such contests is to kill as many coyotes as possible, and prizes are awarded to those who shoot the most. The Rock Springs contests are slated to take place partly on BLM-managed federal land—and contest organizers have failed to obtain the requisite permits and liability insurance.

The first of these upcoming contests, the “Wyoming Coyote Classic,” is scheduled for this Saturday, January 7. In light of the impending date, the coalition is turning up the pressure, encouraging their members and supporters to contact the BLM field office to demand it take action this week.

According to BLM regulations, the purpose of requiring special recreation permits is to manage visitor use, protect natural and cultural resources, minimize recreational use conflicts and provide for the health and safety of visitors.

These planned contests pose great risk to natural resources, as contestants are freely using public lands to shoot as many coyotes as possible. Without permits, recreational use conflicts are almost certain, which raises safety concerns for visitors not aware of or not participating in the contest. With participants competing to kill as many coyotes as possible in a short period of time, there is an increased risk that participants will act carelessly, possibly injuring other recreational users or even killing visitors’ dogs on public lands.

The event promoters have also failed to obtain the federally mandated liability insurance prior to hosting the contests. Both upcoming events have no age restrictions, and contestants may enter without prior firearm experience. Serious hunting injuries are especially common among younger and inexperienced participants. As property managers, the federal government could be held liable if a participant or bystander is injured during these contests, putting public safety and taxpayer money at risk.

“Wyoming coyotes can be legally persecuted in almost any manner imaginable,” says Program Director Kristin Combs of Wyoming Untrapped. “Like trapping, these ‘recreational’ contests are not based on a sound science foundation, and it’s time to reform these archaic ‘wildlife management’ practices.”

The Animal Legal Defense Fund is the nation’s preeminent legal advocacy organization for animals and has taken on coyote killing contests in the past, including shutting down a Kansas event several months ago.