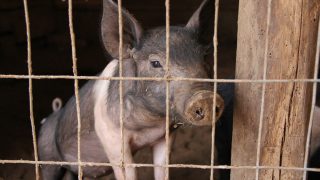 Large industrial farming operations, many of which confine over 100,000 animals at one time, have been exempted from a key federal law that protects air and water quality by the U.S. Environmental Protection Agency (EPA). While other types of industrial facilities are required to report when toxic gases are released under the Emergency Planning and Community Right-to-Know Act, EPA has decided that factory farms are not required to do so — putting communities, farmed animals, and wildlife at significant risk, especially during natural disasters.

The Animal Legal Defense Fund joined a coalition of animal and environmental protection groups in a lawsuit aimed at fixing this dangerous exemption. Unfortunately, it’s not the first time that the government has considered giving factory farms a free pass when it comes to transparency.

Since 2007, the EPA has repeatedly tried to create this exemption and even lost a lawsuit on the matter that was filed by The Waterkeeper Alliance in the United States Court of Appeals for the D.C. Circuit. EPA’s action is the latest iteration of its long-standing efforts to exempt large farming operations from federal regulation.

Factory farms are major contributors to air and water pollution. Facilities that confine and slaughter the estimated 9 billion land animals who are raised and killed for food annually in the U.S. produce a tremendous amount of highly toxic waste, most of which winds up in our air and waterways — a threat to people, wildlife, and the environment. But factory farming is an enormous industry with incredible financial and political clout which it routinely wields in an effort to exempt itself from laws, including animal cruelty and environmental laws.

North Carolina, for example, is home to nearly 10 million pigs. These animals produce a staggering 9.5 billion gallons of urine and feces every year — waste that is stored in open-air pits, sometimes called manure lagoons. Under the best conditions, waste from these lagoons runs off into our rivers and lakes, contaminates drinking water sources, and poisons the ecosystem. Nutrients in the waste create algal blooms that in turn lead to dead zones, waters that are so depleted of oxygen that no aquatic life can survive. In addition to having a devastating impact on fish and other aquatic life, the process of eutrophication — when waters become overly rich in nutrients and low in oxygen — can also eliminate sources of drinking water for wild animals. Manure runoff also puts local drinking water supplies at risk of being contaminated with bacteria like salmonella and e. coli.

Hurricane Florence, which pummeled the Southeast in September, provided a poignant reminder of the environmental dangers created by factory farms during natural disasters. North Carolina houses approximately 4,000 waste lagoons. Heavy rains from Hurricane Florence resulted in the overflow of animal manure from at least 30 sites around the state, including five pig-waste lagoons, some of which also sustained structural damage. Two lagoons alone released more than 7 million gallons of pig waste into North Carolina tributaries during the last week of September. Hurricane Florence also reportedly led to the deaths of 3.4 million chickens and 5,500 pigs, who were left to drown on factory farms during the storm.

While most of the media coverage of the hurricane’s impact on North Carolina’s massive factory farm industry focused on water pollution, air pollution is another serious threat both during disasters and year-round. As animal manure decomposes, ammonia, a dangerous air pollutant, is produced. When ammonia is released indoors, it immediately harms both the animals confined in these facilities and human workers, burning the respiratory tract and resulting in distressed breathing. These gases can be fatal — not only to humans but to the animals trapped inside the facilities as well. People have been killed by noxious fumes produced by manure pits, and in 2015, more than 1,000 pigs were killed after being overcome by noxious gas emissions from manure lagoons at a factory farm near Tracy, Iowa.

It should go without saying that prompt information about factory farms’ air emissions benefits human lives. But, the Earth is a closed loop and humans are not the only ones detrimentally affected by factory farms. Animals require and deserve clean, healthy places to live just as much as humans do.

Factory farms can take measures to reduce their toxic air emissions. But if residents and environmental and animal advocates aren’t aware of the problem, factory farms have little incentive to do so. Requiring these facilities to report pollution data keeps communities, farmed animals, and wildlife safer and healthier.