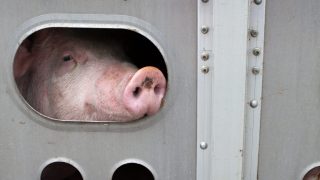 In the conclusion to a trial that garnered global media attention and shined a spotlight on the treatment of farmed animals in Canada, on May 4, 2017, the Ontario Superior Court of Justice acquitted Toronto animal advocate Anita Krajnc of all charges for offering water to overheated pigs on a transport truck bound for slaughter. Krajnc’s case inspired multiple petitions of support and the slogan “Compassion Is Not a Crime.”

As reported in a previous Animal Law Update, Krajnc was arrested and charged with criminal mischief in June 2015 for “interference with the use, enjoyment and operation of property” after giving water to panting pigs confined in a sweltering trailer on a hot summer day.

According to Krajnc, the pigs were overheated and severely dehydrated when she offered them water through narrow openings in the truck while it was stopped at a traffic light on the way to Fearman’s Pork slaughterhouse. The owner of the pigs filed a complaint with police the following day, citing concern that Krajnc’s actions might have “contaminated” his property, making the animals unfit for slaughter. If convicted, she would have faced up to $5,000 in fines, six months in jail, or both.

In a video of the incident, a pig is seen panting heavily inside the tractor trailer and appears to be in distress as Krajnc asks the driver to give the animal some water. He warns her not to give the animals anything and chastises her, “These are not humans, you dumb frickin’ broad!” Krajnc pleaded not guilty to the charges, saying her only crime was compassion, and her lawyers argued she was acting in the public interest. Krajnc told The Washington Post:

“I did what I did because I was just following the golden rule, like you’d treat others as you’d like to be treated. If someone’s thirsty, you give them water. When someone is suffering, it’s actually wrong to look away. We all have a duty to be present and try to help. In the history of the world, that’s how social movements progress.”

The criminal case revolved around the question of whether the pigs, as property, were unlawfully interfered with when Krajnc gave them water. Despite allegations by the police and prosecution that Krajnc had given the pigs an “unknown substance” that could potentially endanger the food supply or result in the facility refusing to slaughter the pigs, Justice David Harris found that it was clear she had only given them water. Because her actions in offering water to the pigs did not stop them from being slaughtered, Justice Harris also dismissed the claim that Krajnc had interfered with the “lawful use of property,” noting that activists had been giving water to slaughter-bound pigs at this same facility for two years prior to Krajnc’s arrest, and these actions had never resulted in animals being turned away from the slaughterhouse.

Although he dismissed the charges, Justice Harris criticized the defense’s comparisons of Krajnc’s actions to those who gave water to Jewish prisoners being transported to concentration camps during the Holocaust, and rejected analogies to human rights leaders like Mahatma Gandhi, Nelson Mandela and Susan B. Anthony, saying these arguments did not factor into his decision.

Even if one rejects comparisons between animal protection and human rights causes, most would agree that animals, including farmed animals, are worthy of basic decency and kindness. The legal classification of animals as property, coupled with an agriculture system in which cows, pigs, chickens, and other farmed animals are routinely treated as commodities rather than the sensitive and intelligent beings science increasingly shows them to be, encourages callous disregard for their wellbeing. Many legal experts believe expanding the concept of legal personhood to animals is the best way to prevent their cruel treatment, a path for which Krajnc’s lawyers, Gary Grill and James Silver, argued in court.

According to “The Anita Krajnc Trial: Compassion, the Public Interest, and the Case for Animal Personhood,” which was published in the University of Toronto Faculty of Law student newspaper, there was a lengthy exchange during closing arguments about the concept of legal personhood and whether it should be applied to animals, especially given scientific advances regarding the capacities of animals. During a talk at the University of Toronto, Grill and Silver:

“… Acknowledged that this case was unlikely to result in profound changes to the law. However, by discussing animal personhood in a Canadian courtroom, they hoped to raise awareness about an area of widespread scientific consensus: the extraordinary cognitive abilities and emotional complexities of animals. As neuroscientist Dr. Lori Marino testified during the trial: ‘Pigs are persons. They are at least as emotionally complex as dogs and as psychologically complex as primates. It sells pigs short to say they are as sophisticated as a human toddler, for they are more complex than that.’”

Pigs also outperform dogs on many cognitive tests, yet there is a stark disparity between what is considered acceptable treatment of animals defined as pets versus those defined as food.

As this case highlights, in both Canada and the U.S., farmed animals have few meaningful protections under the law, leaving them vulnerable to cruel and neglectful treatment that would be illegal if the victim were a companion animal. Although the truck driver and owner of the slaughterhouse maintained the pigs had been watered and transported lawfully, Canadian regulations allow pigs to be transported for up to 36 hours without food, water or rest, in addition to a five-hour food withdrawal period before travel.

Krajnc is co-founder of grassroots group Toronto Pig Save, which bears witness to pigs, cows, chickens and other farmed animals in their final moments as they approach slaughterhouses. The strategy of bearing witness is based on the philosophy of Leo Tolstoy, encapsulated in a quote on The Save Movement’s homepage: “When the suffering of another creature causes you to feel pain, do not submit to the initial desire to flee from the suffering one, but on the contrary, come closer, as close as you can to him who suffers, and try to help him.”

Toronto Pig Save holds weekly vigils and in the summer offers water and watermelon to dehydrated pigs outside slaughterhouses. Its inception in 2010 ignited the global Save Movement, a worldwide network that has grown to more than 130 groups, whose members work “to raise awareness about the plight of farmed animals, to help people become vegan, and to build a mass-based, grassroots animal justice movement.”

As The Save Movement gains momentum, companies that profit from animal exploitation grow more anxious, as evidenced by increasingly bold attempts to silence advocates. Earlier this year, slaughterhouse Manning Beef filed a trespass lawsuit against Los Angeles Cow Save, which holds vigils on the road in front of the facility to bear witness to the suffering of the animals slaughtered there and raise public awareness about cruelty to farmed animals.

In April 2017, the Animal Legal Defense Fund, the Law Offices of Matthew Strugar, and attorney Ryan Gordon from Advancing Law for Animals filed a motion on behalf of Los Angeles Cow Save under the California “anti-SLAPP” (Strategic Lawsuit Against Public Participation) statute, which protects activists from baseless lawsuits that seek to intimidate them from exercising their right to free speech on issues of public concern. In June 2017, the Los Angeles Superior Court dismissed Manning Beef’s lawsuit against the activists as meritless, recognizing the slaughterhouse was trying to stifle their First Amendment rights.

For The Save Movement, bearing witness and telling the stories of the countless individual farmed animals killed in slaughterhouse every day is part of a broader strategy for social change, which includes shifting the legal status of animals. As Krajnc wrote in a Toronto Star op-ed: “It’s wrong to see pigs as property, just as it was wrong hundreds of years ago to see human slaves as property and women as chattel — the property of men. The law needs changing.”

A necessary first step to enacting meaningful legal reform for farmed animals is transparency regarding their treatment, which is why the Animal Legal Defense Fund is leading the fight against Ag-Gag laws in the U.S. With pigs, chickens, and cows used for dairy increasingly locked away in windowless buildings that bear little resemblance to most Americans’ image of a farm, and slaughterhouses moved to the outskirts of cities and towns, the lives and deaths of most farmed animals are hidden from public view. Besides the existing challenges to access these facilities to document the treatment of animals, the agriculture industry has been lobbying vigorously not only to block any legislation deemed friendly to animal protection but also to pass laws to criminalize whistleblowers to further shield themselves from public scrutiny and accountability.

The Animal Legal Defense Fund, with a coalition of other groups, successfully challenged Idaho’s Ag-Gag law in 2015, when the United States District Court of Idaho ruled it unconstitutional on both free speech and equal protection grounds. Idaho appealed the decision and oral arguments were heard in the United States Court of Appeals for the Ninth Circuit on May 12, 2017. The Animal Legal Defense Fund has pending cases challenging similar laws in Utah and North Carolina.