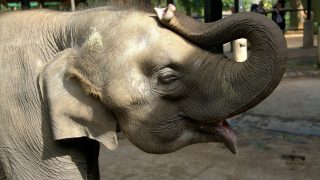 A ban on the use of bullhooks – sharp implements used to beat and train elephants to perform unnatural acts – in circuses and traveling shows has been signed into law by Governor Jerry Brown. Although Gov. Brown vetoed a similar bill in 2015, citing an unwillingness to complicate the California penal code, the revised version includes only civil penalties.

Beginning on January 1, 2018, the new law will prohibit the use of “a bullhook, ankus, baseball bat, axe handle, pitchfork, or other device designed to inflict pain for the purpose of training or controlling the behavior of an elephant.”

Earlier this year, Rhode Island passed the first statewide ban on bullhooks, which have come under increasing scrutiny as a cruel and archaic training device. Rhode Island and California join more than 50 American cities that have passed legislation either banning the use of bullhooks or prohibiting animal exhibitions, displays or acts (e.g. circuses) outright. It is virtually impossible for circuses to perform in cities with bullhook bans because elephants cannot reliably be controlled or induced to perform without using these implements – some call them weapons – which resemble a fire poker and are used to prod, stab and hit the animals.