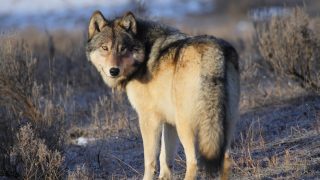 The Border Wall: Disastrous for Wildlife

The United States is rich in biodiversity, but the wildlife and ecosystems we share with Mexico are continually endangered by climate change and human encroachment on wildlife habitats.

In January, the federal government announced that it would replace the San Diego border wall with a staggering 30-foot wall — potentially made of impermeable concrete—as well as building multiple sections of new prototype walls near the Otay Mesa border crossing. These projects are the first of the government’s recently funded border wall construction.

In an effort to evade compliance with vital environmental laws and regulations, the U.S. Department of Homeland Security invoked the waiver components of a 2005 immigration law known as the REAL ID Act with regard to the San Diego wall construction as well as an area of wall near Calexico, California.

The agency asserts that this law provides it a waiver for compliance with numerous laws enacted to protect both our environment and endangered species, including the National Environmental Policy Act, the Endangered Species Act, and the Migratory Bird Conservation Act. But the scope of the Real ID Act’s waiver provision was very limited, authorizing waiver only for very specific portions of wall that were required to be “expeditiously constructed” within a few years of the passage of that 2005 law.

The waiver of these decades-old environmental laws threatens the animals living in habitats that transverse the U.S.-Mexico border.

To protect our ecosystems and the animals that call them home, the Animal Legal Defense Fund joined litigation brought by a coalition of wildlife protection groups that include Defenders of Wildlife, the Sierra Club, and the Center for Biological Diversity against the U.S. Department of Homeland Security. The lawsuit argues that the agency’s attempt to waive the laws is illegal—and it is overreaching with its interpretation of the act.

This Is a Critical Case to Protect Environmental and Animal Laws

These wall construction projects—which are now slated to begin as early as November—are the first attempt to use the REAL ID Act of 2005 to waive environmental protection laws to allow construction of the border wall. The determination of the legality of the agency’s effort to waive animal and environmental protection laws will have implications—as this project proceeds—across the more than one thousand miles of the proposed border wall.

Further, this decision will impact how the federal government is required to treat animals and the environment in future policy decisions.

The border wall would divide animal families, interfere with breeding and migratory patterns, and potentially result in the extinction of many of the more than one hundred endangered or threatened species that call the border area their home.

To thrive, animals need access to the full range of their habitats. Barriers that isolate groups of animals also lead to inbreeding, which decreases genetic diversity and ultimately puts species at risk of extinction. Unimpeded migration is essential to gene flow.

Additionally, many animals will suddenly find their natural migration routes impassable. Species across the animal kingdom are genetically programmed to migrate to find more hospitable weather and food or to mate.

Disrupting or permanently severing natural migration routes would be disastrous for countless species, some whom travel thousands of miles every year.

The impact on the San Diego area alone includes wetlands, meadows, and coastal land. Just a few of the species jeopardized by construction include the western snowy plover, a threatened shorebird, as well as the endangered Quino checkerspot butterfly and California least tern.

A full wall extending across the border between the United States and Mexico would additionally compromise dozens more endangered or threatened species. According to the U.S. Fish and Wildlife Service, over 100 endangered, threatened, or near-threatened species would be impacted. Animals including Mexican gray wolves, jaguars, and ocelots may go extinct as a result.

For example, Sky Islands, a region that straddles the Arizona-Mexico border, is home to over 7000 different animal and plant species, including black bears and mountain lions. It is one of the most biologically rich areas in the country.

Some fencing already exists in the region, and additional construction would further imperil the Sky Islands. The endangered Sonoran Pronghorn is another victim of humanmade barriers, and its future is uncertain.

The Sonoran Pronghorn exists at a critically low number, and they require the ability to migrate across country borders to survive. Additional construction in the Sonoran Desert would fatally compromise their ability to forage for food and find mating partners.

The federal government must respect its own laws and consider the impact that construction will have on our environment. The Animal Legal Defense Fund is committed to protecting our native wildlife and will continue to fight to keep their habitats safe.