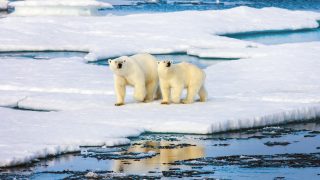 Portland, OR – For decades, the U.S. government has aided industries at the expense of the public. It has promoted, subsidized, and incentivized animal agriculture, including permitting the use of public land and deforestation to build additional factory farms. In addition to direct subsidies, both the U.S. and state governments have exempted animal agriculture, and other industries like fossil fuel extraction, from environmental protection laws that regulate greenhouse gas emissions, water use, and air quality, to name a few.

Now, faced with a lawsuit for its role in climate change, the government argues the problem is too big, and affects too many people, for any individual to have a right to demand action. Meanwhile, the government’s actions, like subsidizing the industries that contribute most to climate change, and inactions, like failure to adequately incentivize clean-energy or regulate emissions, continue to exacerbate the climate crisis. Ironically, the U.S. government may be the only institution with adequate resources to mitigate and attempt to reverse climate change.

Today the Animal Legal Defense Fund, the nation’s preeminent legal advocacy organization for animals, and Seeding Sovereignty, an Indigenous women-led collective nonprofit, appealed an Oregon federal court’s dismissal of a groundbreaking lawsuit to compel federal government action on climate change based on our right to nature and wilderness.

The Declaration of Independence begins with a reference to the freedom from others that is only possible in nature. That right, of access, as well as the correlative responsibility to preserve it, is inherent in our Constitutional right to liberty — often referred to by courts as the ‘right to be let alone’ — and coalesces with the conception of wilderness enshrined in The Wilderness Act. We have a fundamental, Constitutional right to be free from the influence of others — influences like disastrous climate change.

An explicit right to nature would have been completely unnecessary, and perhaps unfathomable, to articulate in a pre-climate change era. But the court’s assertion — that our right to nature does not exist — reduces Americans’ freedoms exponentially.

“The consequences of climate change in the U.S. have already been deadly, and by all accounts is just the tip of the rapidly-melting iceberg,” says Animal Legal Defense Fund Executive Director Stephen Wells.

This year, the West Coast has seen an exponentially high number of dead marine animals washing ashore, including grey whales, fur seals, and sea lions, Florida’s red tides have killed hundreds of manatee and tens of thousands of fish, and July’s heatwave is responsible for the deaths of at least six people. In August 2019, reports revealed evidence of a direct link between human-induced global warming and melting of the West Antarctic Ice Sheet and massive ice sheets in Greenland and Iceland, which — if not addressed and alleviated — will have a serious impact on rising sea levels on a global scale.

“Traditionally, laws, legislators, and courts have viewed the environment as a resource to be consumed and exploited for profit. This lawsuit would confirm that preserving wilderness should be the baseline for environmental protection — preserving what remains and restoring much that was lost will be essential to any plans to mitigate climate change,” says Wells. “Just as the U.S. and State governments have incentivized and facilitated the destruction of wilderness for short-sighted profit, our lawsuit seeks to force these institutions to turn their resources towards protecting and restoring wilderness.”

Scientists warn that climate change caused by greenhouse gas emissions is precipitating a global mass extinction event — the sixth in the Earth’s 3.5 billion year history. Normally, between one and five species will go extinct annually. However, scientists estimate that we are now losing species at 1,000 to 10,000 times the normal rate, with multiple extinctions daily, a rate of loss not seen in more than 60 million years. These losses cannot be undone, robbing present and future generations of any opportunity to enjoy and learn from life that took millions of years to evolve. Scientists also warn that we are running out of time to reverse, or even slow down, the destruction.

“Midst this climate crisis and mourning the echoes of animal relatives lost daily, nature offers medicine to combat the planet’s rising fever,” says Seeding Sovereignty Executive Director Janet MacGillivray. “Wild lands offer a climate solution for everyone — yet are being auctioned to benefit capitalism’s wealthy few. From nature, all life flows — air, water, medicine, culture, and a future. Our obligation is to do all we can for those yet to come. Seeding Sovereignty believes that the right to nature is the right to life, inherently essential, priceless in value, and worth protecting.”

Plaintiffs include scientists, nature enthusiasts, and wildlife advocates who are no longer able to safely conduct their research or interact with nature because of how climate change is already affecting the country.