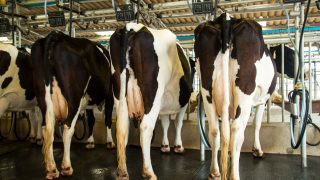 Sacramento, CA – Today the Animal Legal Defense Fund submitted a petition for rulemaking to the California Department of Water Resources and the State Water Resources Control Board asking both agencies to address the severe water shortage in California. The petition requests that the agencies exercise their authority to regulate water usage by industrial factory farming, which is California’s worst abuser of the scarce natural resource.

California is now well into its sixth year of drought, a situation Governor Jerry Brown calls the “new normal.” To date, the state’s response has included unprecedented cuts in residential water usage but has largely ignored factory farming. According to the Pacific Institute, a global water think tank, producing meat and dairy uses nearly half of California’s annual water footprint of 20 trillion gallons. While Californians were doing their part by cutting back on residential water usage, the state’s meat and dairy industries were making record profits.

The petition filed today proposes a remedy to this seemingly arbitrary disparity in the state’s drought response. California’s Constitution prohibits “the unreasonable use or unreasonable method of use of water,” and the Animal Legal Defense Fund, the nation’s preeminent legal advocacy organization for animals, is asking the state to exercise its authority under this “reasonable use doctrine” to limit the construction of new meat and dairy factory farms or expansion of existing ones.

Factory farming of animals for meat and dairy further exacerbates drought by contributing to climate change, and is grossly inefficient compared to crop agriculture. It takes six times more water to produce one gram of beef protein than for plant-based proteins like beans and lentils. A staggering 5,214 gallons of water are used for just one pound of beef, compared to 267 gallons for one pound of soybeans.

The drought is having a disastrous impact on California’s communities, ecosystems and wildlife, and requires immediate action. Leaving factory farming largely unchecked while imposing unprecedented restrictions on residential water use is an alarming policy choice that today’s petition seeks to correct.

“Allowing the meat and dairy industries to expand in a climate of drought is unreasonable, especially when these industries are making record profits while most Californians are sacrificing,” says Stephen Wells, executive director for the Animal Legal Defense Fund. “Factory farming’s abuse of water remains unchecked. Maintaining current policies on water usage will continue to hurt Californians and the environment at large.”