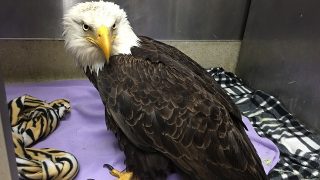 UPDATE: Sadly, the eagle was euthanized in mid-August due to the severity of his injuries. The Animal Legal Defense Fund continues to offer a $5,000 reward for information leading to the arrest and conviction of the person or people responsible for the shooting.

PORTLAND – The Animal Legal Defense Fund, the nation’s preeminent legal advocacy organization for animals, is offering a $5,000 reward for information leading to the arrest and conviction of the person or people responsible for shooting a male bald eagle near Gaston, Oregon in late June. Total reward, including the Audubon Society of Portland’s $1,500 reward offer for a conviction, now totals $6,500.

The eagle was first spotted injured the third week of June, but was unable to be caught. Continued searches led to his rescue on June 28.

The eagle’s condition when initially treated was grim: complications from the gunshot wound to his shoulder were feared fatal. The eagle has since improved, though it is doubtful he will be able to return to the wild or ever enjoy the freedom of flight again. Compounding this tragedy, the Audubon Society of Portland—that is providing the eagle’s care—believes he was half of a nesting pair. How the eagle’s mate or their eaglets fared following his injury is unknown.

The eagle’s shooting is under investigation by the U.S. Fish & Wildlife Service and Oregon State Police. Bald eagles are federally protected under the Migratory Bird Treaty Act and the Bald and Golden Eagle Protection Act, the latter of which makes hunting, capturing, shooting, injuring or killing a bald eagle a crime punishable by up to a $5,000 fine and a year in jail for first offenses. It is also a violation of Oregon state law to hunt bald eagles—which could result in additional charges under the state anticruelty law.

“Though the shooting of a bald eagle is a tragedy no matter when it occurs, the timing of this crime is bitterly ironic. This living symbol of the United States spent the Fourth of July fighting for his life because of the shooter’s cruel act,” said Animal Legal Defense Fund Executive Director Stephen Wells. “The Animal Legal Defense Fund thanks the U.S. Fish and Wildlife Services and Oregon State Police for their efforts to hold the perpetrator accountable, and offers our full support in getting justice for this eagle.”

If you have information related to this incident, please contact the U.S. Fish and Wildlife Service’s Oregon Office at 503.682.6131.