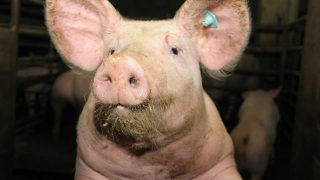 After public outcry, Tom Vilsack, Secretary of Agriculture, ordered an internal review of the Nebraska-based facility, which tests on thousands of cows, pigs, and sheep, and is overseen by the USDA’s Agricultural Research Service. But Animal Legal Defense Fund’s letter calls for action by the Office of the Inspector General—an independent agency authorized to investigate problems and offer its own recommendations. Today’s letter asks the OIG to recommend policy changes to end the misuse of taxpayer dollars that funds cruel and wasteful experiments.

For decades, the Meat Animal Research Center has failed to meet even minimal standards of animal welfare. According to the Times, the taxpayer-funded experiments include allowing lambs to die of exposure and starvation after being abandoned by their mothers, and housing animals in overcrowded and unsanitary conditions. Thousands have died from starvation. Hundreds of cows have died from mastitis, a highly painful but easily treatable udder infection.

Even the meat industry has balked at these experiments, given the severity of animal suffering. An Institutional Animal Care and Use Committee (IACUC) is required to oversee protocols for testing facilities and  ensure experiments minimize pain and alternatives are employed where possible. However, MARC’s committee has greenlighted shockingly cruel tests that few other facilities would ever permit.

“These horrifically cruel experiments make use of loopholes in animal protection laws to increase the industry’s bottom line,” said Stephen Wells, executive director of the Animal Legal Defense Fund. “We ask the Office of Inspector General to investigate this abuse of taxpayer dollars and cruelty to animals.”