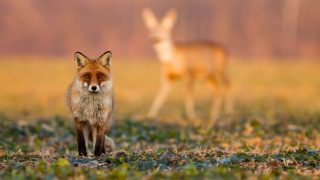 In April 2017, the Animal Legal Defense Fund, the Law Offices of Matthew Strugar, and attorney Ryan Gordon from Advancing Law for Animals filed a motion on behalf of Los Angeles Cow Save to dismiss the trespass lawsuit under the California “anti-SLAPP” (Strategic Lawsuit Against Public Participation) statute. The anti-SLAPP statute protects activists from baseless lawsuits that seek to intimidate them from exercising their right to free speech on issues of public concern.

In its lawsuit, Manning Beef alleged that the group trespassed on its property by holding vigils on the road in front of its slaughterhouse. Los Angeles Cow Save holds these vigils to bear witness to the suffering of farmed animals and educate the public about farmed animal welfare.

The anti-SLAPP motion argued that the vigils were a form of protected speech and took place on public sidewalks, not on Manning Beef property. The City of Pico Rivera regards Manning Road, the road in front of the slaughterhouse, as a public road. Further, the Los Angeles County Sheriff’s Department has refused Manning Beef’s requests to remove protestors attending the vigils.

“The court rightly recognized that Manning Beef was attempting to stifle the First Amendment rights of Los Angeles Cow Save,” says Animal Legal Defense Fund Executive Director Stephen Wells. “In this case, the anti-SLAPP statute served its purpose and protected activists working to increase public awareness about the suffering of farmed animals.”

“A SLAPP suit is the wealthy’s fit of spite,” says Animal Legal Defense Fund’s co-counsel Matthew Strugar. “Manning Beef sought to scare activists from continuing to speak out for farmed animals. The court thankfully recognized the lawsuit as a SLAPP and the activists can continue their protests without fear of this lawsuit hanging over them.”

This victory comes a few months after the Animal Legal Defense Fund won another anti-SLAPP motion in Texas, where a judge dismissed a lawsuit against the organization, its attorney, and its client, holding that the Texas anti-SLAPP statute protected their allegations of inhumane treatment of captive tigers at Houston’s Downtown Aquarium.

Activists with Toronto Pig Save have been similarly attacked. Earlier this month, the founder of Toronto Pig Save was acquitted of criminal mischief after giving water to a pig headed for slaughter in 2015.