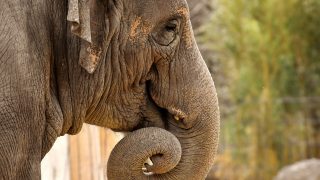 Elephants Bamboo and Chai are suffering immensely in the Seattle-based Woodland Park Zoo. That’s why, today, the Animal Legal Defense Fund (with the pro bono assistance of Gibson, Dunn & Crutcher) submitted a friend of the court brief in support of the right of Seattle taxpayers to see records about the conditions in which the elephants at Woodland Park Zoo are kept. Open records lawsuits are crucial to safeguarding the ability of the public to advocate for and protect animals in captivity.

ALDF’s amicus brief comes after a trial court denied a Seattle taxpayer these records. The trial court held the taxpayer was not entitled to the records because the zoo is not performing a governmental function, despite the fact that it receives millions of tax dollars every year from the city to operate the zoo. ALDF’s brief argues that the zoo is subject to the state’s Public Records Act as a government-funded entity.

The public has been increasingly outraged by conditions of captivity at the zoo. Last year, Watoto, a 45-year old African elephant, was euthanized after keepers found her suffering from arthritis so badly she couldn’t move to an upright position. Harmful management, longstanding neglect, and inhumane breeding practices have hurt elephants like Bamboo, Watoto, and Chai. These elephants suffer severe and chronic foot and joint problems, unexplained bleeding, and psychological damage.

Elephants are sensitive, intelligent, family-oriented, and social, and require wide expanses for their well-being. But that’s not what they get at the Woodland Park Zoo. Chai has been treated like a breeding machine: inseminated over 100 times, her only live birth, Hansa, died at just six years old. Chai and her fellow pachyderm prisoners demonstrate severe psychological suffering, compounded by pathetically small enclosures that prevent them from engaging in many natural behaviors.

For more than a century, the zoo used taxpayer dollars to support the cruel treatment of animals. The zoo’s origins lie in Seattle’s 1899 purchase of 200 acres on the southwest shore of Green Lake. From the beginning, the zoo has been fundamentally beholden to the people of Seattle. In 2010, ALDF filed a lawsuit on behalf of Seattle taxpayers against the zoo for cruel treatment of elephants. That lawsuit was dismissed by the court on standing, a procedural ground—but the court expressed concern about holding elephants captive and did not exonerate the zoo’s treatment of the elephants.

As cities begin to partially privatize their zoos, taxpayers risk losing their right to know how animals are treated in these facilities. This threat to transparency undermines public records laws, as ALDF argues in its brief. The Woodland Park Zoo has announced it will send the zoo’s two surviving elephants to the Oklahoma City Zoo—against the wishes of Seattle taxpayers, the majority of the city council, and the mayor, who all want to see Bamboo and Chai retired to a reputable sanctuary.