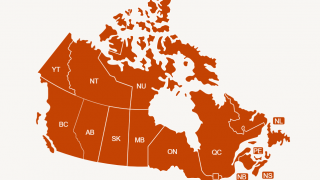 Canada – A new in-depth study released by the Animal Legal Defense Fund confirms the wide range of disparity that currently exists across the country in terms of provincial and territorial animal protection legislation. The Animal Legal Defense Fund’s eighth annual report, the only one of its kind in Canada, ranks each jurisdiction on the relative strength and comprehensiveness of its animal protection laws.

The ranking is based on a detailed comparative analysis of the animal protection legislation of each province and territory, focusing on sixty study questions spanning eleven categories. Each jurisdiction is attributed a numerical ranking based upon its cumulative score and is grouped into a top, middle, or bottom tier.

This year, Manitoba continues to hold its position as the province with the strongest animal protection legislation. It is joined in the top tier by Nova Scotia, British Columbia, and Ontario.

Nova Scotia shows the most significant improvement, moving from fourth to second position. Nova Scotia’s improved ranking is attributable to its enactment of stiffer maximum penalties, with animal abusers now facing fines up to 75,000$ and imprisonment for up to two years for a third or subsequent offence.

The province also broadened the range of protections benefiting animals, including protection against being kept in unsanitary conditions and protection from abandonment that is likely to cause distress. Additionally, Nova Scotia’s amended legislation now explicitly recognizes animals’ ability to suffer psychologically.

Since last year’s report, New Brunswick prohibited the permanent tethering of dogs and Ontario became the first province or territory to ban the possession and breeding of orcas in captivity. Though these constitute noteworthy improvements, because they are only applicable to a limited number of species, they do not affect New Brunswick or Ontario’s rankings relative to other jurisdictions.

Quebec continues to occupy the bottom tier when it comes to animal protection, along with Saskatchewan, the Northwest Territories, and Nunavut. However, with the recent introduction of a new bill designed to significantly enhance the province’s animal protection legislation, the Animal Legal Defense Fund is hopeful that Quebec – currently ranked the best province to be an animal abuser – will show marked improvement in next year’s rankings.

Since the Animal Legal Defense Fund began publishing these rankings in 2008, many provinces and territories have significantly strengthened their animal protection legislation, and more advances are on the way. However, there continues to be considerable differences across the country, with some jurisdictions making substantial steps forward, and others lagging behind.

Irrespective of its current rank, every province and territory has ample room for improvement. It is the Animal Legal Defense Fund’s hope that these ongoing reviews continue to shed light on this important issue and garner support for both the strengthening and enforcement of animal protection laws throughout the country.

The Animal Legal Defense Fund encourages those who care about the welfare and protection of animals to contact their elected officials about the importance of having strong, comprehensive laws in this field, and to alert law enforcement should they ever witness animal abuse or neglect.