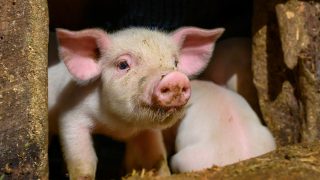 WASHINGTON, D.C. — Today, a coalition of local, regional, and national organizations with a range of interests such as environmental justice, environmental protection, climate change, animal protection, sustainable farming, and food safety sent a letter that urges the U.S. Department of Agriculture (USDA) not to allocate conservation funding from the Inflation Reduction Act (IRA) toward the factory farm gas industry. Factory farm gas is methane trapped, often via a tarp covering a manure lagoon, as liquified animal waste decomposes. Factory farm gas is often referred to as “biogas,” “renewable natural gas,” “biofuel,” or “biomethane.”

The letter notes, “The IRA includes investments intended to address the worsening climate crisis by reducing GHG emissions by roughly 40 percent below 2005 levels by 2030. Approximately $20 billion has been allocated to support USDA’s agricultural conservation programs, such as the Environmental Quality Incentives Program and the Regional Conservation Partnership Program, as well as tax credits and funding for renewable energy and biofuels. One such incentive, an extension of the Energy Investment Tax Credit (Section 48) creates a 30 percent credit for “qualified biogas properties,” including factory farms with methane digesters. This amount balloons to 50 percent for certain facilities in “high energy” areas, which are already overburdened with negative externalities from energy production — a clear environmental injustice.”

“Propping up industrial agriculture through incentivizing factory farm gas will expand one of the worst polluting industries — harming surrounding communities and animals, while hindering our ability to tackle the climate crisis,” says Animal Legal Defense Fund Executive Director Stephen Wells. “It’s critical we end subsidies to industrial animal agriculture instead of allowing the industry to profit from its own pollution.”

“The USDA needs to stop denying factory farming’s enormous harm to the climate and finally take a firm stand for public health by refusing to subsidize this dirty industry through the Inflation Reduction Act,” says Hannah Connor, an attorney for Center for Biological Diversity. “We can’t prevent a climate disaster as long as millions of our tax dollars are wasted every year on propping up corporate polluters and their half-baked, techno-fix proposals that greenlight pollution instead of addressing its daily harm to communities and the environment.”

The letter continues, “Agricultural policy that supports the entrenchment and expansion of factory farms is a barrier to real mitigation of the climate crisis and to more sustainable and just farming methods and a diversified food system. Factory farm gas production is only compatible with industrial animal agriculture that produces far more waste than can be responsibly managed, and perversely encourages the use of liquified manure management systems – the cheapest and most environmentally destructive form of manure management. Factory farm gas incentives have already created a ‘manure gold rush’ by establishing revenue streams for the manufacture of liquid manure. These incentivize the further expansion and consolidation of the largest factory farms, which are already major polluters and sources of environmental injustice.”

In November 2022, Senator Cory Booker (D-NJ) articulated concerns about biogas at an Agriculture Committee hearing noting, “I believe that this installing of big biodigesters on manure lagoons is not a solution, and rather it’s just a form of greenwashing that doesn’t alleviate the suffering in the communities and doesn’t alleviate the harm they’re causing to the environment.”