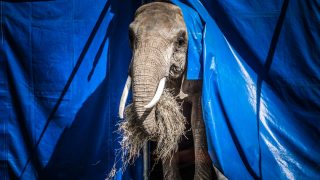 HB 594 prohibits the use of wild animals in traveling acts in North Carolina.

Wild animals in traveling acts spend most of their days in cramped, barren cages, deprived of the ability to engage in natural behaviors. Forced to perform frightening and sometimes painful tricks, they endure a lifetime of misery. Additionally, many wild animal exhibitors that perform in North Carolina have histories of federal Animal Welfare Act violations and dangerous public safety incidents.