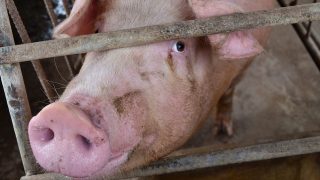 Prohibits the intensive confinement of mother pigs and calves used for veal (S. 3401/A. 5236)

S.3401/A.5236, sponsored by Senator Vin Gopal and Assemblyman Raj Mukherj, would ban gestation crates and veal crates, mandating mother pigs and calves have enough space to turn around freely, lie down, stand up, and fully extend their limbs.

In coalition with animal protection groups, the Animal Legal Defense Fund is working to end the intensive confinement of mother pigs and calves used for veal in New Jersey. S.3401/A.5236, sponsored by Senator Vin Gopal (D-11) and Assemblyman Raj Mukherj (D-33), would ban gestation crates and veal crates, mandating mother pigs and calves have enough space to turn around freely, lie down, stand up, and fully extend their limbs.

In the winter of 2021, actor, director, and New Jersey native Paul Wesley spoke out for mother pigs and calves, urging New Jersey to ban cruel gestation and veal crates.

Both gestation crates and veal crates are extremely cruel. Gestation crates are metal cages that confine mother pigs for virtually their entire lives. These crates are so small that animals are unable to even turn around. Veal crates are small, individual cages used to confine newborn calves prior to slaughter. The crates essentially immobilize these playful, energetic creatures, preventing them from engaging in almost any natural behavior and social interaction.

The COVID-19 pandemic and the connection between animal exploitation and zoonotic disease has further underscored the urgent need for this law. A landmark United Nations report on pandemic risks noted that the extreme confinement of farmed animals is one of the top drivers of zoonotic disease emergence. Banning gestation and veal crates not only reduces animal suffering but also protects public health.

“Gestation crates are a real problem. Basically, you’re asking a sow to live in an airline seat. . . We’ve got to treat animals right, and gestation stalls have got to go.” 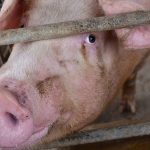 Please help end the intensive confinement of mother pigs and calves used for veal in New Jersey by urging your state senator to support S.3401/A.5236.

Attend New Jersey Humane Lobbying Webinar: Priorities for Animals in 2021 on May 4th to learn lobbying skills, hear from New Jersey elected officials who have helped advance humane laws, and learn about pending bills in the New Jersey legislature.

Spread the word about this campaign by taking a photo of your companion animals with one of our #BanTheCratesNJ signs and sharing it on social media. 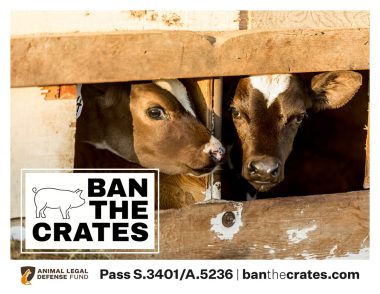 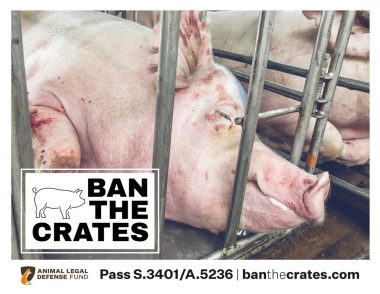 Due to the duration and severity of their confinement, pigs in gestation crates suffer among the worst abuses in factory farming. For several years, mother pigs are nearly immobilized, enduring a cycle of repeated impregnation.

Despite the intense bond between cows and their babies, calves raised for veal are taken away from their mothers within days or even hours of birth. These calves are placed in veal crates that immobilize them.

Learn more about farmed animals and the law.