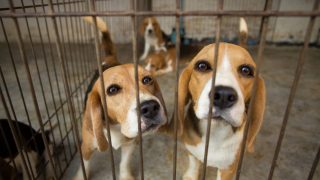 Facilitating the Adoption of Dogs and Cats Retired from Laboratories (Massachusetts)

Requires dogs and cats at research institutions or product testing facilities be offered for adoption through a non-profit animal shelter or rescue or through private placement once the research ends, if a necropsy is not mandated

An Act Protecting Research Animals (H.901), known as the “Beagle Bill,” provides an opportunity for dogs and cats to be adopted into a home after their time in a research or product testing laboratory has come to an end – an opportunity that each of these dogs and cats deserve.

Signed into law by Governor Charlie Baker on August 4, 2022, this law requires that dogs and cats, no longer needed for research purposes at research institutions or product testing facilities, be offered for adoption through an animal shelter or rescue, or private placement, once the research ends, if a necropsy is not mandated and if the animal is suitable for adoption.

Other states across the country, including California, Connecticut, Illinois, Maryland, Minnesota, Nevada, and New York, have similar laws. People who have adopted dogs and cats retired from research or testing attest that these animals can flourish once they are out of a laboratory setting. Every dog and cat deserves the chance to be a part of a family.

The Beagle Bill was sponsored by Senator Bruce Tarr (R-1st Essex and Middlesex), former Representative Carolyn Dykema (D-8th Middlesex), and Representative Michelle DuBois (D-10th Plymouth). H.901 was reported out favorably – accompanied by S.613 and H.890 – by the Joint Committee on Environment, Natural Resources and Agriculture after a public hearing on November 17, 2021. It was referred to House Committee on Steering, Policy and Scheduling, which released a redraft that was passed by the full House on May 9, 2022. The Senate Rules Committee released a redraft of the bill, which then passed the Senate on July 11, 2022. The House and Senate enacted the bill on July 26, 2022, and Governor Charlie Baker signed the bill into law on August 4, 2022.