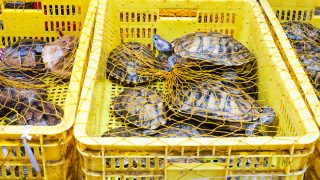 Cracking Down on Live Animal Markets and Wildlife Trafficking (California)

SB 1175 would crack down on live animal markets and the trophy hunting of endangered species by making two critical changes to California law. Championed by Senator Henry Stern, SB 1175 bans the importation and sale of live wild animals that pose a zoonotic disease risk as well as the importation and possession of the body parts of certain endangered and threatened species, like elephants, lions, and rhinos, who are frequently hunted for “trophies” in other countries.

In California, amphibians, reptiles, and birds are allowed to be imported and sold in live animal markets. Animals in these markets are typically confined to tiny, filthy cages — terrified as they await slaughter. But live animal markets are not only deeply cruel, these markets are also breeding grounds for zoonotic disease due to the unsanitary and stressful conditions animals endure. An estimated 60% of all viruses that infect humans came from animals, and 75% of new infectious diseases in the past decade are zoonotic. Because humans and the wild animals come into close contact at these facilities, it’s easy for a novel disease to jump.

While proponents frequently claim that killing endangered species somehow supports their conservation, trophy hunting provides no benefits either to the species as a whole or individual animals. Unfortunately, Americans traveling to other countries continue to fuel this cruel industry. In 2017, more than 650,000 wildlife “trophies” (the body parts of dead animals) were imported to the United States. This figure includes threatened and endangered animals. Prohibiting trophy hunters who reside in California from importing dead animals would decrease demand, helping animals across Africa.