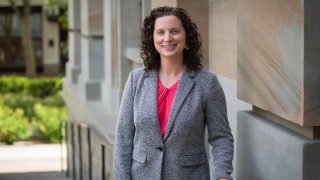 Director of the Criminal Justice Program

As Director of the Criminal Justice Program, Lora Dunn leads a team of attorneys in assisting, training, and educating prosecutors, law enforcement, judges, veterinarians, and other key stakeholders throughout the country on animal cruelty cases. Under her leadership, the Criminal Justice Program expanded the breadth of its judicial trainings, including a first-of-its-kind formal partnership with the National Council of Juvenile and Family Court Judges, which resulted in the publication of the judicial bench book Animal Cruelty Issues: What Juvenile and Family Court Judges Need to Know.

Lora has also been instrumental in expanding the Criminal Justice Program’s amicus brief work including such seminal cases as State v. Fessenden (exigency exception to the warrant requirement applies to animal victims in emergency situations), State v. Newcomb (blood draw of a lawfully seized animal is not a “search” under the Oregon Constitution and Fourth Amendment), and State v. Nix (animals are crime “victims” for sentencing purposes). Lora also helped draft and enact some key legislation, including an Oregon law that allows private citizens to enjoin animal cruelty crimes through Oregon’s nuisance abatement code; and one of Oregon’s most extensive “omnibus” animal cruelty bills that improved sentencing guidelines for animal abuse, strengthened Oregon’s pre-conviction forfeiture process, and added new licensing and record-keeping requirements for animal rescues.

In 2019, Lora received the Unity Award from the Association of Prosecuting Attorneys for her work for animal victims. Lora is an adjunct professor at Lewis and Clark Law School, where she teaches the Crimes Against Animals course. She has been quoted in the New York Times, The Huffington Post, The Dodo, One Green Planet, and The Oregonian.