In 2016, the Animal Legal Defense Fund filed a lawsuit in state court challenging Monterey County, California’s contract renewal with the U.S. Department of Agriculture’s Wildlife Services — a controversial federal program whose main purpose is to kill animals. The program is estimated to have killed some 2.7 million animals in 2016, of which nearly 1.6 million were native species.

The lawsuit — filed with a coalition of animal and environmental protection groups and a Monterey County resident — argued that Monterey County’s renewal of the contract violates the California Environmental Quality Act (CEQA) because the county failed to analyze the environmental impacts of its agreement and wrongfully claimed an exemption from CEQA. Also, the county held no public hearings about a CEQA exemption claim, and did not disclose the details of its agreement with Wildlife Services.

The California Superior Court ruled in our favor in 2017, finding that Monterey County violated the CEQA by failing to perform an environmental analysis prior to re-contracting with Wildlife Services. 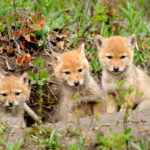