In 2017, the Animal Legal Defense Fund submitted a substantial objection comment letter to the United States Department of Interior’s proposal to create a so-called . Despite its name, the proposed council’s express purpose was limited solely to promoting international trophy hunting and pushing false propaganda that such trophy hunting had benefits for conservation and antipoaching efforts.

The Animal Legal Defense Fund’s comment letter demonstrated that the formation of this Council violated the (“FACA”), which requires that the Council “be in the public interest,” not for private special interests. As we explained, while efforts to improve foreign wildlife conservation and survival, including through efforts to combat illegal trafficking and poaching, are important—indeed vital—public interests; promoting hunting is not. Nor does international trophy hunting improve wildlife conservation or antipoaching efforts, it actually undermines them.
The Council’s limited focus on promoting international trophy hunting, rather than seeking to identify methods that will actually promote wildlife conservation and antipoaching efforts, thus violates FACA.

The Animal Legal Defense Fund also explained that the proposed Council violated other requirements of FACA, including the requirement that the agency “assure that the advice and recommendations of the advisory committee will not be inappropriately influenced by . . . special interest,” and that “the membership of the advisory committee be fairly balanced in terms of the points of view represented.” These are important substantive requirements imposed by FACA to avoid fundamental First Amendment problems. Yet, the Council’s proposed membership stacks the deck in favor of hunting special interests, whose views are antithetical to the stated goals of improving international wildlife conservation and combating poaching.

Beyond the FACA violations, the Council’s viewpoint discriminatory focus on pro-hunting activities is simply misguided. International trophy hunting undermines the purported goals of the Council of improving international wildlife conservation and antipoaching efforts. Indeed, President Trump quite correctly called international trophy hunting a “horror show”  that in no “way helps conservation of Elephants or any other animal.” Numerous studies have similarly demonstrated President Trump’s conclusion was accurate. Moreover, empirical data demonstrates that photo safaris and ecotourism generate 15 times the revenue of trophy hunting. Yet, the Council’s current mandate will not allow any consideration of those more effective alternatives.

The Animal Legal Defense Fund’s opposition letter concluded that while the ultimate purported goal of the Council—international wildlife conservation—is laudable, the Council’s narrow and restricted focus on promoting international trophy hunting is fundamentally flawed legally and factually because hunting undermines the very stated goal of the Council. Accordingly, the Council is not authorized under FACA and must be eliminated or substantially revised to consider wildlife conservation methods that might actually be effective.

Despite major opposition from the Animal Legal Defense Fund, many of our members, as well as other animal and environmental protection groups, the International Wildlife Conservation Council was convened in March 2018 — and was comprised almost entirely of trophy hunters.

Ask your state legislators to support a bill that would restrict the sale, trade, and distribution of ivory and rhino horn in the Massachusetts.
January 12, 2020 Wildlife 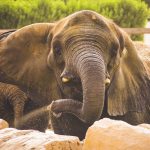