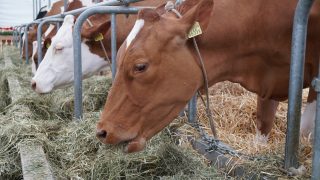 On Saturday, March 28, more than 150 attorneys, law students, and animal advocates came together to attend the first symposium of the Animal Legal Defense Fund’s Los Angeles regional attorney network, where top experts discussed legal and grassroots strategies to challenge the harmful impacts of factory farming on animals, humans, and the environment. The sold-out event took place at the University of Southern California Gould School of Law, and was co-hosted by USC’s Student Animal Legal Defense Fund (SALDF) chapter.

The day began by addressing the suffering of animals in factory farms; with almost every natural instinct denied to them, these sensitive, sentient beings experience what ALDF director of litigation Carter Dillard called “psychological torture.” And the torment is not only psychological: customary farming practices, exempt from most anti-cruelty laws and defined by the industry itself, involve mutilating animals’ bodies with no pain relief. No federal laws govern the conditions in which farmed animals are raised.

Next, ALDF manager of investigations TJ Tumasse spoke of the routine abuse he witnessed as an undercover investigator in factory farms and slaughterhouses, being sure to remind the audience that the abhorrent treatment he saw every day represented the inherent cruelty of the industry, rather than the actions of a few “bad apple” workers (although he also witnessed individual acts of cruelty against helpless animals all too often). When he talked about newborn piglets entering the world “in a state of what could only be described as jubilation,” only to have their world shortly dissolve into terror and pain upon meeting their first human, many were fighting back tears.

Still drying my tears, I found Beyond Meat CEO and co-founder Ethan Brown’s keynote presentation inspiring and uplifting. He talked about his company’s mission to use technology and innovation to help animals by creating better plant-based “meat” products that will revolutionize the future of food and replace animal agriculture. With investors like Bill Gates, Beyond Meat’s future—and the possibility of animal-free meat products that will save animals, the environment, and our health—looks bright.

Afternoon panelists addressed the environmental devastation caused by factory farms, human health risks posed by food borne pathogens and overuse of antibiotics, and possible avenues to effect positive change on both these wide fronts. Investigative journalist Will Potter closed the day with a keynote address about his mission to inform people of the reality of factory farms—compared to persistent cultural myths about farming—through his reporting. A networking reception followed the symposium, allowing attendees (which included student representatives from at least 10 different SALDF chapters) to continue the conversation.

Attendees left the symposium armed with new knowledge, strategies, and connections, and we look forward to having more events like this in the future. One of the most important messages of the day was that various constituencies can, and must, work together to combat factory farms. Due to the vast scope of the problem and its wide-ranging impacts, a multi-pronged and collaborative approach is absolutely necessary to dismantle the structure of industrial animal agriculture. Factory farming is a formidable foe, but we must continue our fight. The animals are depending on us.