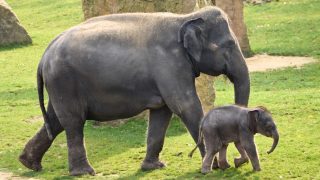 We’re obliterating African elephants, killing 96 of them every day: 100,000 in just three years. The reason is simple and familiar: human greed. Elephants have many wonderful qualities, yet they are being killed to supply their tusks to the ivory trade. And, despite the efforts of many great organizations, passionate advocates, and even some governments, the slaughter continues at an unprecedented pace, a pace that the elephant birth rate cannot keep up with. The result will be the extinction of African elephants within one decade.

For an optimist like me, this is a trying time. I’m losing hope. As long as we humans view African elephants as nothing more than a commercially useful body part, the mass slaughter will continue. And, time is quickly running out. Therefore, I propose that we radically change how we view, discuss and ultimately protect elephants.

My view of elephants has been influenced by the scientific studies that inform us that they are large brained, highly intelligent and sentient social beings with complex communication skills. One recent study showed that wild elephants distinguish the sound of bees from the sound of human voices, and communicate those distinctions to other members of their herd. They signal each other, not only that there is danger, but also to identify the type of danger, bees or humans.

Other scientists are recording that elephants form lifelong matriarchal family units, in which they teach their children everything they need to know to survive in the wild; that they cooperate with each other to solve problems, and that some of them suffer from PTSD. Anecdotal examples of elephants exhibiting compassion, both to their own kind and ours, abound.

One of my favorites is the story of an African elephant who accidentally injured a man in the bush, breaking his leg. Displaying the sort of empathy and intelligence that was once thought to be possessed only by humans, this elephant moved him out of the hot sun and placed him under a tree. Even though her own family moved on, she stayed with him for a day, until his villagers realized he was missing and came to rescue him. Once he was safe, the elephant moved on to rejoin her family.

Leading elephant expert, Joyce Poole, has observed that when elephants are ready to do a group charge, they look at each other to make sure everyone is ready, and after the charge, they celebrate, lifting their heads high into the air, clanking their tusks, and making trumpeting and rumbling noises.

If we can learn to see elephants as the remarkable individuals they are, then we will cease asking the question “what is the sustainable use of wild elephants?” All use, all exploitation must stop. I am part of a growing group of people who no longer view elephants as merely things, who recognize their extraordinary capacities, and who want to engage in a dialogue about completely altering the way we view and treat these wonderful beings. And, we need to start now, because, by the end of this day, another 96 will have died horribly and senselessly.

In an article appearing in the latest issue of the Quinnipiac Law Review, I argue that elephants must be granted legal rights. “In all legally relevant ways, elephants possess qualities that compel us to put aside convention and convenience, and to realize that for too long we have ignored and violated their rights. Elephants are not things. Legal systems which treat them as such are inherently flawed.”

Legal rights for elephants would enable us to codify and enforce broad new legal protections of their lives, well-being, and dignity. We could no longer exploit them, kill them, or use them for our own purposes. We would allow them to live out their natural lives, with their families, in their native lands. Now that would be something to rumble and trumpet about.