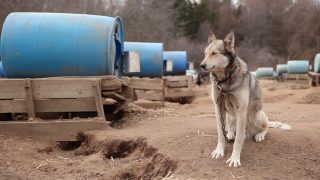 Before I joined the Animal Legal Defense Fund, I was the executive director of the Alaska Wildlife Alliance, and Alaska’s unique animal protection concerns will always have a special place in my heart.

Alaska is home to so many iconic animals. Everyone is familiar with the image of sled dogs, made famous by the Iditarod, the annual thousand mile sled dog race. The grueling race captures the imagination, but most people are unaware that the event is propped up by an industry of shocking cruelty. Much like the abysmal puppy mills that stock pet stores nationwide with sick dogs, the breeding and raising of sled dogs is indefensible and cruel. I am honored to appear in a documentary film on the subject, “Sled Dogs,” premiering at the Whistler Film Festival on Dec. 3, 2016.

The world needs to see this documentary. The image of the sled dog industry, the things we are allowed to see, like the start of the Iditarod, is all very carefully managed. The horrifying things like the cullings and the dogs that are kept on short chains for the vast majority of their lives, are all happening out of sight, out of mind. Sled Dogs explores this reality, including how puppies are raised like athletic machines, the mass culling of 100 sled dogs in Whistler and the inherent cruelty of forcing dogs to endure the Iditarod.

The Iditarod gets at the heart of what is so wrong with the sled dog industry. While the Iditarod was inspired by the 1925 serum run to quell a diphtheria outbreak, the modern event is purely recreational.

The serum, brought into Nome, Alaska by a team of dogs led by the famous Balto, saved countless lives. But Balto didn’t make the nearly 700 mile journey himself, he was one of 20 teams that participated in the relay. This fascinating piece of history has turned into the Iditarod, in which dogs are forced to do something that people in the past would have never asked dogs to do. When people absolutely relied on dogs, they would have recognized immediately that such a task would be abusive to dogs. Now the Iditarod is marketed as a re-creation, but it bears no resemblance to the event. It’s merely a big money sporting event.

“Sled Dogs” rips away the manufactured image of sled dog racing, and it has the potential to change what is considered acceptable treatment for these dogs.

Watch the trailer and learn how you can get involved at sleddogsfilm.com.