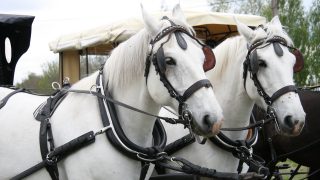 The Animal Legal Defense Fund has filed a request for a temporary restraining order against the St. Louis Metropolitan Taxicab Commission after yet another horse ran wild through city streets, barely averting disaster. Downtown St. Louis was met with chaos last weekend after a runaway horse named Bud charged through city streets without his driver. Bud, who is forced to pull a carriage for the St. Louis Carriage Company, was surely terrified as he desperately galloped across the city, after his driver let go of his reigns. A collision would have meant disaster for automobiles and likely loss of life for Bud or members of the public.

The Animal Legal Defense Fund has been fighting hard to protect the city’s carriage horses from this cruel and dangerous industry. Together with local pro bono legal counsel and the St. Louis Animal Rights Team (START), ALDF has asked the court repeatedly to force the commission to protect horses from an industry with no oversight or concern for animal and human safety. Just last week, on April 22, ALDF had filed an amended petition to the court asking for enforcement of safety guidelines. Two days later, Bud broke free from his restraints and barreled through town, as captured in the video above.

These dangerous incidents are common to companies like the St. Louis Carriage Company. In statements released by local media reports, a spokesperson for the St. Louis Carriage Company claimed Bud, a one-ton horse fleeing at full gallop, was just a rare incident of a driver abandoning his horse. But just a few years ago, a driver for the same company was knocked off his carriage by a human assailant. That horse, Harry, also made a terrified bolt down the city’s urban landscape. And a witness to last weekend’s scare claims to have seen driverless horse carriages running through the city multiple times just this year.

Horses are easily frightened and confused by traffic and sudden noises. Many accidents result from horses spooking—and these accidents have caused serious (and sometimes fatal) injuries to horses, as well as public harm and destruction to property. Last December, ALDF filed a petition on behalf of START against the commission for failing to enforce regulations (section 608 of the Vehicle for Hire Code) against the carriage industry. Public records show the commission stopped enforcing regulations (including provisions for animal welfare) in 2013. ALDF urged the commission in July 2014 to get back on the horse—so to speak—and enforce these regulations. Earlier this spring, the St. Louis University SALDF chapter (Student Animal Legal Defense Fund) also filed a request for rulemaking with the commission, asking them to strengthen enforcement of the code. After the commission failed to take action, ALDF requested declaratory judgment from the St. Louis City Circuit Court and that case is ongoing.

Carriage horses aren’t just suffering in traffic accidents, but also endure terrible neglect and overwork. They are often forced to work all day, seven days a week, rain or shine, on hot asphalt, to the point of exhaustion and under chaotic conditions. Vets sent to Brookdale Farms, where horses exploited for their labor are confined, reported that the horses were malnourished. In 2013, a horse from Brookdale Farms died during carriage rides, right after the commission stopped enforcing regulations. The next year, in 2014, an exhausted carriage horse collapsed during a parade in front of the city’s health director. The commission’s failure to enforce the Vehicle for Hire Code is putting the well-being of the public and the welfare of these horses at grave risk for fatality. The next time a horse breaks free, the result could be far worse. Disaster is just waiting to happen.