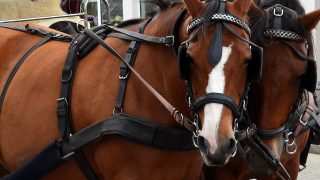 The protest follows the dismissal of a petition filed with the St. Louis City Court, requesting the court to force the St. Louis Metropolitan Taxicab Commission (MTC), and it’s executive director Ronald Klien, to regulate the St. Louis horse-drawn carriage industry. The Animal Legal Defense Fund (ALDF) and START are appealing the decision.

MTC is accused of neglecting their responsibility to enforce regulatory requirements that include provisions for animal welfare, veterinary care, housing, and work restrictions for the horses.

King was owned by Eureka-based Brookdale Farms, which MTC had previously investigated after multiple complaints of neglect and malnourishment. A veterinarian sent by MTC in 2010 reported that all horses at Brookdale Farms were deprived of adequate food, and many were malnourished. Though an investigation of King’s death was promised to the public in 2013, a Freedom of Information Act (FOIA) request revealed that no such investigation occurred. In fact, MTC mysteriously abandoned its enforcement responsibilities regarding carriage horses altogether later that year, spurring ALDF & START’s lawsuit.

WHO: Twenty local residents and members of START

WHAT: Candlelight vigil for King the horse and a protest of continuing inhumane treatment, injuries, and deaths of carriage horses

Bonnie Boime with the St. Louis Animal Rights Team, will be available for interviews at the protest.