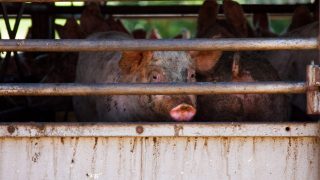 Massachusetts Farmers Charged with More than 150 Counts of Animal Cruelty

In what has been called the largest farmed animal cruelty case in New England, on March 30, 2017, a statewide grand jury indicted the owner of a farm in Westport, Massachusetts, and 26 tenants who rented space on his property on 151 counts of animal cruelty involving mistreatment of 1,400 animals.

After multiple visits by state inspectors, past cruelty charges (but no convictions), and repeated complaints from local residents about what some dubbed the “Farm of Horrors,” many are struggling to understand how a horrific case of this magnitude could have gone on for so long. According to an internal investigation, many say the fault lies with an apathetic culture at the Westport Health Department (the local department most responsible for ensuring proper treatment of farmed animals) and negligent town employees who did not take animal cruelty seriously, and in fact appear to have proactively ignored it.

The charges follow a July 2016 investigation into Westport Tenant Farm by Westport Police, Massachusetts Environmental Police, the Massachusetts Department of Agricultural Resources, the American Society for the Prevention of Cruelty to Animals (ASPCA), and the Animal Rescue League of Boston (ARLB). The investigation, which began after police received a 911 call about animal cruelty at the property, revealed hundreds of animals – including cows, pigs, goats, sheep, horses, dogs, rabbits, and chickens – living in deplorable conditions with many lacking basic food and water. Some animals were found housed with rotting carcasses and many were suffering from severe malnutrition, untreated wounds, and contagious diseases.

According to a press release by the Massachusetts Attorney General’s Office, some animals “were living in such deep manure waste that their hooves had rotted off and they were suffering from painful eye, intestinal and skin ailments.” Lieutenant Alan Borgal of the ARLB said the situation at Westport Tenant Farm was “unparalleled” to anything he had seen in his 37 years as an animal law enforcement officer: “The sheer number of animals in dire need of care, and the cruel and unsanitary conditions we found were deplorable.” As reported by the Boston Globe, this included “cows trapped in barbed wire” and “emaciated dogs kept on short chains in pens littered with broken glass.”

The scope of this case and the tremendous number of animals involved created unique issues for law enforcement. As reported by NBC 10 News, Detective Jeff Majewski of the Westport Police Department said: “It’s not your typical crime where there was one crime scene, one suspect. You’re talking about 23 different crime scenes, 26, 27 different suspects, and then 1,400 pieces of evidence.” Despite these challenges, Attorney General Maura Healey has vowed to pursue justice for the animal victims in this case, saying “as a result of our investigation, the owner of this farm and its tenants will be held responsible for the inhumane treatment of these animals.”

Richard Medeiros, the farm’s owner, was charged with 21 counts of animal cruelty and his 26 tenants were charged with between one and 11 counts each. Each count carries a penalty of up to seven years in prison.

This was not the first time problems were observed at this property. Medeiros, along with 12 tenants, was also charged with animal cruelty in 2010 after “authorities discovered malnourished dogs, cows with open wounds, and dead calves on the farm.” However, Medeiros was acquitted of those charges and, according to a Westport internal investigation, there is no record of any follow-up action after the several known problems that led to the 2010 charges.

Yet, according to those on the scene of the 2016 investigation and rescue, animals had been suffering for months and probably years on the farm, which leaves many wondering how these horrendous conditions, which clearly deteriorated over a prolonged period of time, could have reached such a crisis point without the authorities taking action. Why had the farm been able to pass inspections as things got progressively worse for the animals trapped there?

Last year, following a comprehensive review of interviews, documents, and video relating to the case, the Boston Globe concluded that:

“…town officials failed to discover the deplorable conditions because of their own lax oversight of local farms. Some Westport officials…were steeped in a centuries-old farming culture skeptical of intrusive regulations, and appeared to pay little mind to repeated warnings.”

Due to the fact that Medeiros and his tenants have now been charged with animal cruelty twice in the past seven years, that these animals’ documented conditions were clearly dire for many years, and that several previous complaints about animal mistreatment on the property had gone unaddressed, Westport officials are trying to figure out what went wrong.

It appears that multiple Westport Department of Health employees filed incomplete and falsified inspection reports dating back to April 2015, when a complaint was filed with the Westport Board of Health regarding “dire animal conditions” at the farm by a state animal inspector following a visit to the property. Yet, the town’s former senior health agent did little if anything to address the situation, and in fact, according to an internal investigation, appears to have actively covered it up. The Herald News said of a “scathing” report that resulted from the investigation, written by Westport Town Administrator Timothy J. King in September 2016:

“The Westport Department of Health and its agents did not take cruelty and neglect of farm animals very seriously, neglecting to follow up on cases of suspected abuse and failing to keep detailed and accurate records of local barn inspections…The report also validates what several animal advocates have been saying since the abuse case became public; that town officials dropped the ball and allowed the abuse to happen…But the problems ran deeper than a few individuals.”

King concluded the problem could not be attributed to a few lax employees, but rather was the result of a department-wide lack of care regarding farmed animal mistreatment. King’s report found that although the barn inspections “are seen as a great opportunity to ensure that farm animals are being properly and humanely treated…the general attitude of the Board of Health was that complaints about animal cruelty and neglect were not their responsibility.” He further noted the inspections at Westport Tenant Farm should have triggered referrals to the appropriate agencies for further action, but did not.

After this internal investigation uncovered a pattern of willful inaction by Health Department employees, the town is implementing changes to prevent a situation like this from happening again. One of those changes will be hiring additional animal inspectors and creating a new oversight policy for them. Following the July 2016 investigation and rescue at Westport Tenant Farm, two inspectors were fired for having filed clean inspection reports in January 2016 – reports which bore no resemblance to the actual conditions at the property. Westport is also involved in a civil action to prevent animals from being returned to the farm.

Among the recommendations made by King in his report were to increase supervision and accountability and improve communication and complaint procedure protocols. But the first recommendation offered was aimed at the organizational culture of the department that shirked its responsibility. He wrote:

“The Health Department culture needs to change so that staff have a heightened awareness and sensitivity about the importance of ensuring the prevention of animal neglect and mistreatment of farm animals.”

In the midst of widespread outrage over the town’s culpability in this case, the Westport Board of Selectmen also created a Tenant Farm Plan of Action to guide improvements moving forward, which includes conducting a performance review of the town departments and employees involved in oversight of animal health and welfare, and creating a new Animal Action Committee to determine what can be done to improve this oversight.

Situations like this highlight the importance of sheltering animals who are rescued from large-scale cruelty cases, which can be a steep challenge due to logistics from transporting and medically treating rescued animals to finding permanent placement when there is limited space at sanctuaries and shelters and, in cases where animals can be adopted to families, not enough homes. Although many of the animals found at Westport Tenant Farms had to be euthanized due to the severity of their injuries and/or illnesses, the ASPCA was able to rescue others and give them temporary shelter until they could be permanently placed with shelters and sanctuaries in Massachusetts and nearby states. Some are still awaiting placement. As reported by the Boston Globe, the effort to rehabilitate and relocate the rescued animals, which began six months prior, had cost $1.4 million by December 2016.

Among the rescued animals were 21 goats fortunate enough to be placed with Tamerlaine Farm Animal Sanctuary in New Jersey, which encourages people to get to know farmed animals as individuals. One of the goats, named Huckleberry Finn:

“…doesn’t get too close to people. He arrived with a tag on his ear that said Slaughter Only. His caretakers removed it. ‘It’s our job to show people how important they are,’ [sanctuary president and co-founder Gabrielle] Stubbert said. ‘They’re just as important as your dog or your cat or any animal that you cherish and love and is part of your family.’”

Stories of egregious abuse carried out against animals in factory farms routinely surface as a result of undercover investigations – from cruel confinement, to stressful transport, to the terror and pain of slaughter (though the federal Humane Methods of Livestock Slaughter Act mandates that animals be rendered insensible to pain prior to slaughter, a multitude of investigations have shown this law is routinely violated; it also does not cover birds, who constitute more than 90% of the animals slaughtered for human consumption). Yet cases like this remind us that it is not only factory farms that are problematic. As the horror at Westport Tenant Farm shows, even on small farms we cannot assume authorities will act to stop animal abuse. Of course, consumers can choose not to support the largely-unregulated cruelty inherent in modern animal agriculture by choosing cruelty-free options.