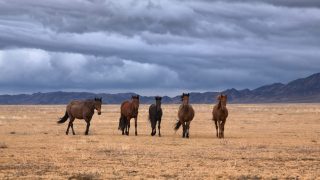 A coalition of animal protection groups is speaking out against the Army’s new plan to address the longstanding population of hundreds of horses whose home includes land on Fort Polk.

Lafayette, LA – A coalition of animal protection groups is speaking out against the Army’s new plan to address the longstanding population of hundreds of horses whose home includes land on Fort Polk. Despite public outcry, the Army released a plan that aims to eliminate the population of horses over a period of three years.

A coalition led by the Animal Legal Defense Fund—the leading legal advocacy organization for animals—condemns the plan, which it says is unrealistic and will result in slaughter for many of the horses.

Despite the horses’ decades of presence at Fort Polk, the Army maintains that they impact training operations and must be removed. The proposed plan involves a cycle of processes to be repeated with groups of about 20 horses until no horses remain. Starting with a 10-day window offering horses to nonprofit animal groups, then a 7-day window for the general public, then offering the horses for sale before starting over with another set of horses.

The coalition notes numerous flaws in the Army’s plan, starting with failure to adequately or accurately research the horses. Without a solid grasp on population, movement patterns, and the difference between truly wild horses and abandoned domesticated horses, the Army cannot possibly devise viable management plans or sufficient alternatives. Under the proposed plan, the 10-day window offered to nonprofit groups is an unacceptably small and the area’s nonprofits simply do not have the capacity for the horses.

Last December the coalition submitted a Freedom of Information Act request to the army regarding their information on the origins and roaming patterns of the horses at Fort Polk, as well as information about the outcome of horses that have already been removed. The Army still has not provided these documents. “This information is critical to developing any successful strategy for managing these horses, and the public cannot meaningfully evaluate and comment on the Army’s proposed plan without it,” says Tulane University Law School Environmental Law Clinical Instructor Machelle Hall.

Under the current plan the Army will essentially offer the horses up for slaughter to for-profit horse traders, as the general public has expressed little interest in purchasing the horses.  An Army representative has previously admitted that there is no intention or ability to follow up on the horses and ensure adherence to the mandate that the horses not be sold for slaughter.

“Equine experts have come forward offering help with plans that would deter other horses from high impact training areas, and it is inexcusable that the Army is proceeding with a plan that appears to value the horses but in reality sends them to slaughter,” says Animal Legal Defense Fund Executive Director Stephen Wells.