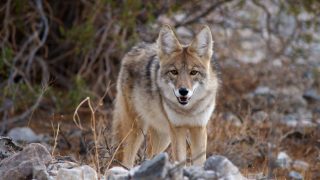 San Francisco, CA — A broad coalition of national animal and conservation groups sent formal letters to the Humboldt County and Mendocino County boards of supervisors today urging them to terminate their contracts with the U.S. Department of Agriculture’s Wildlife Services, which indiscriminately kills tens of thousands of native wild animals in California every year, including coyotes, bears, foxes and mountain lions.

The letters ask the counties to undertake appropriate environmental review and ensure proper protections prior to hiring Wildlife Services to kill any additional wildlife, as required under California state law.

Last year, in response to a similar letter from the Animal Legal Defense Fund, Sonoma County’s Board of Supervisors opted not to renew the county’s contract with Wildlife Services; it is now conducting a review of its wildlife policies. Marin County cancelled its contract with Wildlife Services 14 years ago and implemented a nonlethal predator-control program. As a result, the county has seen a 62 percent decrease in livestock predation at one-third of the former cost.

Since 2000, Wildlife Services has spent a billion taxpayer dollars to kill a million coyotes across the nation. The excessive killing continues unchecked despite extensive peer-reviewed science showing that reckless destruction of native predators leads to broad ecological devastation.

The indiscriminate methods used by Wildlife Services have killed more than 50,000 “non-target” animals in the past decade, including endangered condors and bald eagles. The agency deploys steel-jaw leghold and body-crushing traps and wire snares, which maim and trap animals, who then may take several days to die. These devices have also injured hikers and killed pets — not only in wilderness and rural areas, but often in populated suburban landscapes.

“California taxpayers may be shocked to know their dollars are funding a rogue agency that recklessly kills predators, endangered animals, and pets,” said Stephen Wells, executive director of the Animal Legal Defense Fund. “We urge Mendocino and Humboldt to follow the example of counties that use more humane and more effective methods of predator control.”

“Despite growing public outcry, calls for reform by members of Congress and an ongoing investigation by the Agriculture Department’s inspector general, Wildlife Services poisoned, strangled and shot more than 2 million native animals last year, an increase of almost 30 percent over the year before,” said Tim Ream, a staff attorney with the Center for Biological Diversity’s endangered species program. “Taxpayers in Mendocino and Humboldt should follow the lead of Sonoma and Marin and stop the slaughter.”

“Marin County’s Livestock and Wildlife Protection Program demonstrates that killing wildlife is not necessary to reduce conflicts,” said Camilla Fox, Project Coyote founder and executive director, who helped develop Marin’s nonlethal program. “It has become a national model based on coexistence, community involvement and a recognition that coyotes and other predators are vital to healthy ecosystems.”