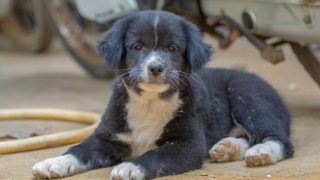 Animal victims of cruelty got a boost last week in Nassau County, New York when Acting District Attorney Madeline Singas pledged to use money from criminal cases to help protect animals. Forfeiture funds—the cash that criminals lose in cases—will pay for the medical care, boarding, rehabilitation, and rehoming of animals seized from harmful conditions by officers of the law in the prosecution of cruelty and the pursuit of justice. In a nod to fair play, doing so will also mean criminals, rather than taxpayers, will be footing the bill for animals abused by criminals.

Where does the money from forfeiture cases usually go? It depends on state law, but it is common to plug this money back into the system to fund other investigations.

But the cost of care for animal victims in criminal cases can, as all pet lovers can imagine, be extraordinary, especially when full-scale, life-saving procedures are required. This is often the case, given the problems of dogfighting, hoarding, and other horrific acts of cruelty.

“Municipal taxpayers should not have to pay for the senseless and criminal acts of another,” Acting DA Singas wrote in a letter sent to municipal leaders, shelter directors, and local police officials throughout Nassau County on April 28.

Acting DA Singas is also advocating for the passage of the Consolidated Animal Crimes Bill as part of her office’s ongoing efforts to prosecute animal cruelty cases. In 2013, the Nassau County District Attorney’s office started a Council on Animal Protection & Safety in the county as a forum for local government and nonprofit agencies to coordinate on efforts to curtail and prosecute animal crimes.

But helping prosecute animal cruelty cases, which this funding will do, also allows for a greater crackdown on all violence in society. “Apart from the well-established social science link between violence against animals and violence against people,” wrote Acting DA Singas, “my office has also found that vigorous investigation and prosecution of animal crimes, most specifically dogfighting, exposes gang networks, narcotics rings, weapons trafficking activity, and other enterprise crimes.”

ALDF celebrates this compassionate choice by the acting district attorney and hopes her decision will serve as a model for other jurisdictions. “This is a good policy, pure and simple,” said Scott Heiser, director of ALDF’s Criminal Justice Program. “The money from these criminal enterprises will be allocated to help prosecutors serve justice to abusers and help other victims outside the district’s drug caseload.”