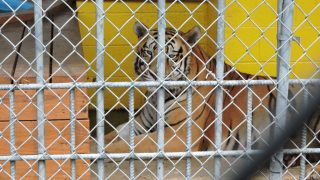 Fighting On in Tony’s Memory

During the last 48 hours since we learned of the death of Tony the tiger, everyone at the Animal Legal Defense Fund has been moved and comforted by the outpouring of love people have expressed for Tony. We fought multiple legal battles for over six years to free Tony and move him to a reputable sanctuary, and we still aren’t done. We have two Tony-related lawsuits that will continue in the wake of his passing and are seeking to learn more about how he died.

The first lawsuit seeks to uphold the constitutionality of the Louisiana Big Cat Ban, a 2006 law that prohibits the private possession of big cats. If successful, this lawsuit would ensure that Michael Sandlin, the owner of Tiger Truck Stop, cannot condemn another big cat to the kind of life Tony had. Sandlin is fighting hard to fill Tony’s truck stop parking lot cage with another tiger, and we will do everything we can to prevent that from happening.

The second lawsuit concerns the United States Department of Agriculture’s (USDA) refusal to recognize Tony as an “individual.” In April, the Animal Legal Defense Fund requested that the USDA conduct an inspection of Tony after learning that his health was in decline. We submitted a Freedom of Information Act (FOIA) request for the inspection report and requested expedited processing, which FOIA requires when delayed disclosure “could reasonably be expected to pose an imminent threat to the life or physical safety of an individual.” Our request for expedited processing was denied because the USDA asserted that Tony is not an “individual.” In July, we sued the USDA for failure to recognize Tony as an “individual.” A victory in this lawsuit would enable the public to quickly obtain crucial information essential to protecting an animal’s wellbeing.

In addition, in the wake of Tony’s death we have made a request under the Louisiana Public Records Act, for a copy of Tony’s necropsy (an examination to determine the cause of death or disease) performed by Louisiana State University, where Tony died. We will carefully review it to determine what caused the alleged renal failure that led to Tony’s tragic death, and ensure it was not the result of improper care or treatment.

It is a tragedy that our years of litigation could not free Tony before his death. As Tony aged and his health appeared to decline, we feared this would happen, but the Animal Legal Defense Fund does not give up. We join the many advocates across the world in remembering Tony this week, and we promise to keep you updated on our work on behalf Tony and other animals like him.