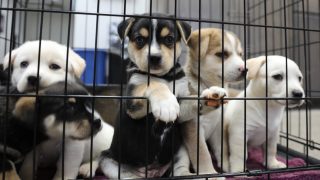 LOS ANGELES — Today the Animal Legal Defense Fund announced that the Los Angeles Superior Court has granted a preliminary injunction that halts the Kenneys, unscrupulous internet puppy sellers, from advertising and selling puppies until the lawsuit is decided on the merits. The plaintiffs — nine puppy purchasers who fell victim to the Kenney’s scheme, and Caru Society for the Prevention of Cruelty to Animals (Caru SPCA) — moved to secure preliminary relief from the Kenneys’ ongoing illegal puppy trafficking on June 15, 2021.

For years, the Kenney family — husband and wife Trina and Rick, and adult children Elijah and Jezriel — have defrauded consumers in Southern California by misrepresenting the health, age, sex, and breed of puppies they breed and sell through Craigslist, Recycler, and other websites.

In today’s decision, the court found the plaintiffs are likely to succeed on their claims, because the evidence presented “shows a consistent pattern” of the Kenneys misrepresenting the health, sex, and age of puppies they sold to the plaintiffs and of the puppies’ health rapidly deteriorating. The court also found that Caru SPCA showed a likelihood of success on the merits of its claim based on the unrebutted evidence demonstrating that the Kenneys have violated animal cruelty laws. The court issued the preliminary injunction to prevent the irreparable harm that could otherwise befall other consumers, who might fall prey to the Kenneys’ scheme and buy sick puppies.

“We are pleased that the court recognizes the grave harm the Kenneys’ conduct poses to consumers and puppies and the order requiring them to stop selling dogs while the litigation proceeds,” says Animal Legal Defense Fund Executive Director Stephen Wells. “This case should serve as a warning of the dangers of purchasing puppies—or any animal—online. A requirement to make a deposit, the transaction location being a parking lot, and lack of screening process are all indicators of a scam.”

“Granting a preliminary injunction against the Kenney family is a huge first step toward stopping fraudulent online puppy trafficking,” said Gary Praglin of the nationally recognized trial law firm Cotchett, Pitre & McCarthy. “Our clients are grateful for the ruling and look forward to having the injunction become permanent at the 2022 trial. This ruling will spare innocent puppies needless suffering and protect unsuspecting families from the heartache of losing a puppy.”

The lawsuit was filed in December 2019. Trina Kenney was previously federally prosecuted and convicted of felony mail fraud for selling abused and sick horses.

A copy of the complaint, and photos of the plaintiffs’ puppies, are available upon request.