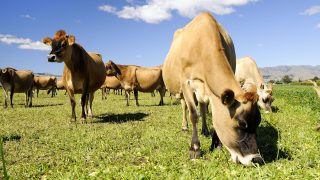 SAN FRANCISCO – Today the Animal Legal Defense Fund announced that the U.S. District Court for the Northern District of California has denied the California Department of Food and Agriculture’s (CDFA) motion to dismiss the lawsuit filed on behalf of Miyoko’s Creamery (Miyoko’s).

Miyoko’s filed a motion for a preliminary injunction — which would permit the company to maintain their labeling as-is while the case proceeds.

The lawsuit was prompted by the agency’s decision to send an enforcement letter instructing the company to stop using terms like “dairy” and “butter” on its products — even with qualifiers like “vegan” and “made with plants.” The agency even instructed the mission-driven company to remove the image of a sanctuary volunteer hugging a rescue cow on its website.

The lawsuit, filed in February 2020, argues that the CDFA’s application of federal regulations is an unconstitutional violation of Miyoko’s right to free speech. The agency’s action is an attempt to censor speech, violating the First Amendment by unconstitutionally restricting truthful commercial speech.

“It’s not the government’s role to censor a business accurately describing their animal-friendly products to their customers, especially when it clearly impedes their first amendment rights,” says Animal Legal Defense Fund Executive Director Stephen Wells. “The company has the right to share its mission and values in its marketing, and — particularly as plant-based foods become more readily available — consumers should always have the freedom to choose products whose values align with their own.”

“This decision is an important step towards victory for both Miyoko’s and the entire plant-based foods industry. The state of California has been unfairly attacking our members for years, all at the behest of the dairy lobby. Now Miyoko’s will get its day in court to ensure the state stops this needless meddling,” said Michele Simon, executive director of the Plant Based Foods Association. Simon’s declaration was cited more than once in the court’s decision.

The dairy industry claims that terms like “cultured vegan butter” and “plant-based cheese” on plant-based dairy products confuses consumers, yet there is no evidence to support these claims. For years, the conventional dairy industry has attempted to undermine its plant-based competitors by making these arguments under the guise of protecting against consumer confusion. Increasingly, consumers are avoiding animal-based dairy due to the immense animal suffering, environment damage, and threat it poses human health and welfare.

The Animal Legal Defense Fund has been at the forefront of demanding fair oversight of plant-based foods, in the face of aggressive lobbying by animal agribusiness — which has attempted to strongarm state and federal lawmakers and regulatory agencies into prohibiting plant-based products from using commonly understood terms in their marketing and packaging.