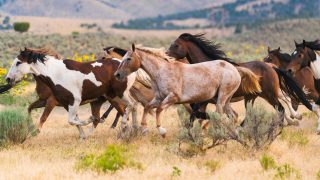 Wild horses are a symbol of the American West, representing adventure and freedom. But a new plan by a federal agency puts as many as 1,000 of these animals at risk. The Animal Legal Defense Fund and the American Wild Horse Campaign have filed a federal lawsuit challenging the U.S. Forest Service’s plans to round up and sell horses living in the Devil’s Garden Wild Horse Territory in northeast California’s Modoc National Forest.

The territory, established in 1975, is federally managed by the Forest Service, a division of the U.S. Department of Agriculture. This area’s wild horses were granted protections by the 1971 Wild Free-Roaming Horses and Burros Act — a federal law that by no means fully protects wild horses, but does provide important legal protections.

It is long-standing policy for the Forest Service, in connection with the Bureau of Land Management, to sell some of the horses rounded up in Devil’s Garden. But in the past, these horses have always been sold “with restrictions” — meaning that the horses could not then be resold for slaughter.

For the first time, the U.S. Forest Service is now allowing some of these horses to be sold “without limitation,” removing the protection from slaughter. This new policy applies to horses who are more than 10 years old, if they haven’t been otherwise sold within 60 days of the roundup period. These horses who can be sold for slaughter have been priced at just $1 each, with each purchaser eligible to buy up to 36 horses at a time.

While it is illegal to slaughter horses in the United States, it’s estimated that every year more than 75,000 horses from the United States are exported to slaughterhouses in Mexico and Canada, countries without these legal restrictions. The butchered horses are then sold for human consumption.

The lawsuit, filed on Oct. 19, 2018 in the United States District Court for the Northern District of California, argues that the U.S. Forest Service’s plan violates the federal Wild Free-Roaming Horses and Burros Act, Administrative Procedure Act, National Environmental Policy Act and California Penal Code section 598c, a state law that makes the slaughter and export of horses for human consumption a felony.

In addition to our legal challenge, the Forest Service’s plan also has drawn sharp bipartisan criticism. “The American people don’t want to see wild horses meet this terrible fate, and the law doesn’t allow what the U.S. Forest Service has planned,” said Animal Legal Defense Fund Executive Director Stephen Wells. “These wild horses deserve better than being forcibly removed from their home, only to be slaughtered and eaten.”