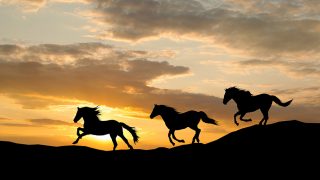 Wild horses have lived in Devil’s Garden Plateau in California’s Modoc National Forest for over 140 years. Devil’s Garden is a federally protected wild horse territory, meaning the horses within it are granted special protections. These protections stretch back nearly 50 years. In 1971, Congress passed the Wild Free-Roaming Horses and Burros Act.

As the title suggests, the law mandated the protection of wild free-roaming horses and burros, noting they are “living symbols of the historic and pioneer spirit of the West.” Despite this sentiment, wild horses have fallen under repeated attack.

In 2012, the United States Department of Agriculture (USDA) significantly reduced the size of the Devil’s Garden territory, leaving many horses unprotected from roundups. Wild horse roundups are dangerous and sometimes fatal.

The horses are forced into corrals using helicopters, breaking up families. After the horses are collected, they are sent to a facility where many are sold for slaughter in other countries. In 2016, more than 200 Devil’s Garden horses were permanently removed from the range in a roundup.

The Animal Legal Defense Fund challenged the USDA’s decision to reduce the Devil’s Garden territory, and filed a lawsuit on behalf of the American Wild Horse Campaign (AWHC), Return to Freedom, and a wild horse advocate. In August 2017, the court ruled in our favor.

Despite their long residence in Modoc National Forest, the federally protected horses that live here are in danger again. Livestock owners filed a separate lawsuit in the Eastern District of California to force the Forest Service (an agency within the USDA) to permanently remove any so-called “excess” wild horses in Devil’s Garden.

Why do they want these horses gone? Ranchers claim that the wild horses compete with the cows and sheep they are raising for food for resources like land and water. Unsurprisingly, agricultural companies that raise animals for food often contend that their interests trump the interests of wildlife and conservation.

The coalition aims to prevent a needless cull of the wild horse herd and ensure that the government does not strike any unfair deals with the agricultural company owners. As long as wild horses are threatened, the Animal Legal Defense Fund will fight to defend them.