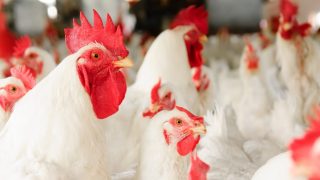 MODESTO, Calif. – Today the Animal Legal Defense Fund sued Foster Farms, operator of a large slaughterhouse and chicken processing plant in Livingston, California, for its illegal use of vast quantities of water in violation of the California Constitution.

Foster Farms is Livingston’s largest water customer, accounting for more than 60 percent of the city’s water usage. It consumes approximately four million gallons of water each day, even though scientists say the region is in the midst of a megadrought and water use — including by residents — is otherwise restricted. Part of this disproportionate water use is due to Foster Farms’ choice to use “electric immobilization” as part of its live-hang slaughter process.

In live-hang slaughter, chickens are hung upside down with their feet shackled through metal slots and the live, conscious chickens are carried by conveyors through a pool of water that is charged with a low electric current that paralyzes them, but leaves them conscious and able to feel pain. Immobilized, chickens cannot vocalize or struggle, as they anticipate their throats being slit by an automated razor.

Live-hang slaughter with electric immobilization is notorious for the animal suffering it causes, and massive amounts of water it requires — in part because being handled and shackled is a terrifying experience for the chickens, who often defecate and vomit on themselves. In addition to the water used to immobilize and defeather the chickens, large volumes of water are needed to clean the feces and vomit from the chickens’ bodies after they die. Other common methods of slaughter use far less water and are less cruel.

“Animal agriculture of all types require tremendous amounts of clean water. For example, by most estimates it takes approximately 518 gallons of water to produce just one pound of consumable chicken,” says Animal Legal Defense Fund Executive Director Stephen Wells. “The profligate water use at this Foster Farms facility adds insult to injury, and the excessive water use in slaughtering chickens violates California law. The fact that the slaughterhouse is operating in a water-scarce area — during a megadrought — makes its water use even more egregious.”

The water that Foster Farms uses is drawn from the Merced Subbasin, a groundwater basin that the California Department of Water Resources has classified as “critically overdrafted.” In the suit, the Animal Legal Defense Fund argues it is unreasonable — and unconstitutional — for Foster Farms to use water from this critically overdrafted subbasin, particularly for a cruel and unnecessary purpose like live-hang slaughter with electric immobilization, to which there are feasible alternatives that use less water.

The Animal Legal Defense Fund argues Foster Farms’ water use constitutes an unreasonable use of water in violation of Article X, Section 2 of the California Constitution, which requires that the state’s water resources are “put to beneficial use” and prohibits “the waste or unreasonable use” of water.

Farmed animals are among the most abused animals, routinely subject to cruelty but with few legal protections. Additionally, animal agriculture generates massive amounts of waste, contaminating air, drinking water, and surface waters, impacting the health of both humans and animals. The Animal Legal Defense Fund files lawsuits to protect farmed animals and the communities harmed by factory farms and slaughterhouses.

Before taking legal action, the Animal Legal Defense Fund reached out to Foster Farms regarding its concerns. Foster Farms responded on May 11, 2020, claiming it was unable to divert resources to the issues raised given their focus on “maintaining operations and assuring a continuous food supply to our nation.” Foster Farms has been ordered to shut down the Livingston slaughterhouse by The Merced County Health Department from Sept. 1 – 7, 2020, due to a COVID-19 outbreak in Merced County which is believed to have originated at the facility. Nine Foster Farm employees from the Livingston facility have died due to COVID-19.

A copy of the notice of intent to sue is available upon request.