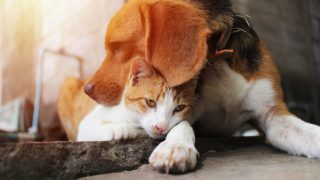 On Friday, Senator Wilk introduced Senate Bill 580 (SB 580), the Animal Cruelty and Violence Intervention Act of 2019, to give judges tools to help rehabilitate those convicted of animal abuse, thus preventing the escalation of dangerous behavior among offenders who hurt animals.

People who hurt animals don’t stop with animals. There is an established link between cruelty to animals and violence toward humans — regularly referred to as “The Link.” This link makes it critically important that cruelty toward animals be taken seriously by law enforcement, and by society at large. This is for the sake of the animals themselves, and for people who are also at risk.

“Animal abuse crimes should be treated seriously because they are serious,” said Wilk, himself the parent of a rescue dog. “Our animal friends need and deserve our protection, but this bill isn’t just about them. It’s also about our mothers and daughters, our friends and neighbors, our children and grandchildren; it’s about all of us.”

Wilk went on to cite statistics that show roughly three-fourths of domestic violence offenders also abused animals at some point. A study of federal prisons also found that 70 percent of the most violent prisoners had histories of serious animal abuse.

“There’s no denying the existence of a problem and it has become ever more apparent that our current mechanisms for identifying and addressing these offenders is neither restorative, nor rehabilitative in any meaningful way,” said Wilk. The bill will require offenders convicted of egregious animal abuse crimes to undergo mental health assessments and, if deemed beneficial by the assessing mental health professional and the court, to seek treatment.

The bill also permits judges to order offenders of less serious crimes to enroll in humane education courses that provide proper techniques for interacting with animals in a positive way.