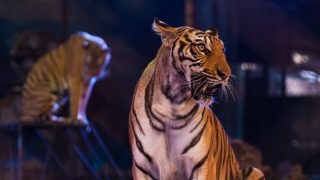 San Francisco, CA — The circus may have closed its doors, but it isn’t emptying its cages. Feld Entertainment, the multibillion-dollar parent corporation of the recently shuttered Ringling Bros. circus, is caught in a quagmire after the Animal Legal Defense Fund discovered the company’s application to the U.S. Fish and Wildlife Service (USFWS) for an Endangered Species Act (ESA) permit to export eight tigers, six lions, and a leopard to a circus in Germany.

The Animal Legal Defense Fund encouraged supporters and advocates to send comments on the application to the USFWS urging the agency to deny the permit—which helped result in over 110,000 public comments to date.

A coalition of animal protection organizations that have consistently put pressure on Ringling Bros. circus for decades—the Animal Legal Defense Fund, People for the Ethical Treatment of Animals (PETA), and the Animal Rights Foundation of Florida (ARFF)—will submit joint comments on July 21, as the 30-day comment period ends.

The comments lay out multiple reasons why the USFWS cannot lawfully issue Feld Entertainment’s requested permits. Chief among these is that Ringling cannot meet the ESA’s requirement that the underlying activity “enhances the propagation or survival of the species,” as moving big cats to allow their continued exploitation at a foreign circus is detrimental both to those individual big cats and to their species as a whole.

Ignoring the spirit of the law, USFWS has taken a controversial “pay-to-play” approach to the enhancement requirement, often issuing permits as long as the applicant makes a nominal donation to a “conservation program.”

The nonprofits that receive these donations are not investigated for legitimacy or effectiveness, nor does USFWS typically verify whether the donations are actually made. On this application, Feld references donations it made years ago and claims it will make a donation to tiger conservation at some point in the future.

Feld also contends that forcing big cats to perform somehow enhances the survival of the species. Not only does that reasoning fail a basic test of common sense, it’s also already well established among experts that the use of imperiled animals in performances fails to educate the public and does nothing to conserve them in the wild. Many in the field agree that the use of exotic animals for entertainment is harmful to animals in the wild.

“Feld Entertainment has submitted an entirely inadequate and unsatisfactory proposal under the Endangered Species Act,” says Animal Legal Defense Fund Executive Director Stephen Wells. “It’s insulting to suggest that condemning these animals to continued exploitation for ‘entertainment’ enhances the survival of the species, especially when there are humane options readily available.”

“If these tigers are shipped overseas, the cruelest show on Earth’s legacy of exploitation and abuse will continue,” says PETA Foundation Associate Director of Captive Animal Law Enforcement Rachel Mathews. “PETA is calling on the authorities to block this despicable attempt to skirt the protections of the Endangered Species Act.”

In addition to condemning the “pay-to-play” aspect of the permit, the coalition’s comments examine the application’s many other flaws, including its ambiguity as to whether Germany will even accept the big cats, where exactly the animals will be held, and the environment in which they will be kept.

Public notice of the application was originally posted on May 25. The Animal Legal Defense Fund and PETA argued the initial application posted was incomplete—and missing background documents. U.S. Fish and Wildlife Services conceded, posting additional documentation—restarting the comment period, which will now close on July 21.