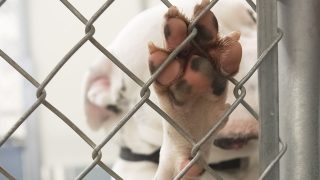 San Francisco, CA — This week, the Superior Court of California in Solano County found the owner of California Carolina Dogs, a puppy mill located in Vallejo, liable for violating the Polanco-Lockyer Pet Breeder Warranty Act following a lawsuit filed by the Animal Legal Defense Fund on behalf of Caru SPCA. In the wake of this ruling the Animal Legal Defense Fund will seek a permanent injunction to remove any remaining dogs at the location.

The lawsuit was filed after numerous complaints citing strong odors, flies, dog bites, unsanitary breeding conditions, and dogs running at large. It is reported the breeder, located in a residential area, had as many as 50 dogs on the property at a time violating several Vallejo Municipal Codes.

“Puppy mills across the country often keep the animals in unsanitary and harmful conditions,” says Stephen Wells, executive director of the Animal Legal Defense Fund. “The court’s decision is an important step in our efforts to close down illegal breeders like California Carolina Dogs so they can’t harm more animals both emotionally and physically.”