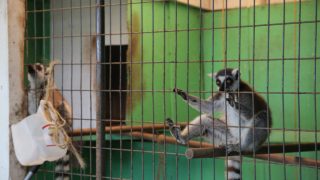 Baltimore, MD – The Animal Legal Defense Fund, the nation’s preeminent legal advocacy organization for animals, served Deer Haven Mini Zoo in Keymar, Maryland with a notice of intent to sue the roadside zoo for violating the federal Endangered Species Act (ESA) and state cruelty laws. The Animal Legal Defense Fund based its notice of intent to sue on extensive video and photographic evidence, visitor observations, and U.S. Department of Agriculture inspection reports that indicate the animals at Deer Haven Mini Zoo are suffering in cruel conditions.

The notice letter offers to assist with the relocation of the animals to sanctuaries but cautions that the Animal Legal Defense Fund will file the lawsuit if illegal conditions persist.

Video footage reveals seriously ill animals, some vomiting and suffering from diarrhea. A mother arctic fox was filmed struggling to breathe or move while her pups walked around her. Multiple U.S. Department of Agriculture inspection reports identify numerous animals with injuries or in poor health including a bobcat, cavy, and coatimundi. Additionally, the facility itself is in poor condition, posing a public safety hazard. Multiple people have already been injured by animals at the roadside zoo.

Deer Haven Mini Zoo also houses endangered species, such as lemurs. Federal inspections cite the roadside zoo for multiple violations regarding the lemurs including the lack of an enrichment plan to promote the psychological well-being of the animals, which is mandatory for non-human primates under the Animal Welfare Act, and persistent sanitation issues around their enclosure. Red ants have been found in and around the lemurs’ food supply, and there are fresh rat holes in their enclosure and throughout the zoo property.

The notice letter identifies both violations of the Endangered Species Act and the Maryland state criminal code, causing suffering of both endangered and non-endangered animals. The Animal Legal Defense Fund intends to file suit under both federal and state law.