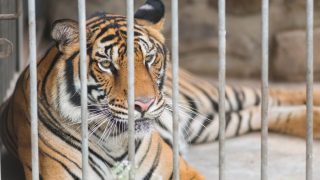 “the possession, sale, breeding, import, or transfer of dangerous wild animals, such as big cats, bears, wolves, primates, and dangerous reptiles, in order to protect public safety and health, and to ensure the humane treatment and welfare of such animals.”

This means that the ABA puts its full endorsement behind the policy position that private ownership of dangerous wild animals should be prohibited throughout the U.S.—subject to reasonable exemptions for “non-profit wildlife sanctuaries, facilities accredited by the Association of Zoos and Aquariums, and research institutions.” The ABA’s 400,000 nationwide membership and impeccable credibility for objectively pursuing justice and uniformity in the law makes this a significant step. Indeed, trade groups who promote exotic animal ownership already are lamenting passage of Resolution 105, stating: “Th[is] Report presents new problems for all exotic animal owners and keepers…”; “Without question, this Report will make its way into legislatures across the country…”; and, “This edict, adopted and approved by the ABA, will be a persuasive argument to politicians.”

As the current chair of the ABA-TIPS Animal Law Committee, I initiated Resolution 105 over three years ago, after dozens of dangerous wild and exotic animals were set loose in the rural Ohio community of Zanesville. The culprit, Terry Thompson, was a recently released convicted felon who had a history of animal cruelty. Reportedly distraught over separating from his wife, Thompson intentionally released more than 50 wild animals from his private menagerie and then took his own life on October 18, 2011.

When law enforcement officials arrived at the scene, they quickly had to choose between using lethal force to stop the animals or risking harm to human life. With nightfall approaching, the difficult decision was made, and over the next few hours police officers shot and killed 49 of the dangerous wild animals Thompson had released, including tigers, lions, bears, mountain lions, wolves, and a baboon.

At the time, Ohio was one of seven U.S. states that shockingly had absolutely no laws restricting private possession of dangerous wild and exotic animals. Bizarrely, while Ohio allowed ownership of grizzly bears, tigers, and venomous snakes with no oversight in 2011, possessing “pit bull-type” dogs was a crime. Both Ohio laws have since been changed through the committed work of animal advocates. But five U.S. states still allow anyone to own any dangerous animal without even so much as a permit. Those states are: Alabama, Nevada, North Carolina, South Carolina and Wisconsin. In addition to the obvious animal welfare concerns, privately owned exotic animals have killed more than 40 Americans over the past 25 years, including eight children—such as the 10-year old boy who was mauled to death by his aunt’s 400 pound Bengal tiger.

The ABA’s passage of Resolution 105 will greatly help us end the hazardous and harmful practice of exotic animal ownership, and prevent the future captivity of animals. Thanks go out to all my colleagues in the ABA-TIPS Animal Law Committee for helping pass this important measure.