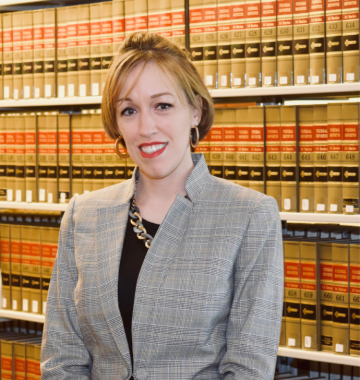 Georgia Reid is entering her 2L year at Touro College Jacob D. Fuchsberg Law Center, located in Central Islip, New York. She is pursuing law as a second career after teaching high school and writing marketing copy. Georgia founded the Touro Animal Legal Defense Fund chapter in the fall of 2019. The chapter hosted a variety of attorneys and experts at the law center to discuss the current trends in animal law and environmental law. The section also ran a holiday pet food drive for the Pioneers in Animal Welfare Society’s “Seniors with Animals Project.” Georgia is also the marketing director for the Suffolk County Bar Association Student Chapter at Touro. Georgia is an animal volunteer at the Sweetbriar Nature Center in Smithtown, NY. She is an advocate for reducing animal agriculture, for legislating to recognize animals as non-human legal persons, and for stronger anti-cruelty laws. Her career interests include animal law, land usage, and criminal prosecution. Georgia has two fur babies, a dog named Winston, and a rabbit named Echo.

The Story of Two Pigs and a Planet in Crisis

I have been an animal lover my entire life. I was raised to respect all animals and treat them with tenderness and care. My childhood home was never without rescued pets, from cats and dogs to rats, rabbits, and birds. My mother even rehabilitated a swan one winter. The swan, who we named Alice, came floating ashore near our home on Long Island. She was unable to swim or move. My mother built a shelter for Alice and nursed her back to health all through the New York cold winter, which included a blizzard. That spring, Alice was able to swim and fly away on her own. We believe she found a mate and lived happily ever after.

Decades later, I am now in law school. My passion for animal law is a top priority in my education and future career. In addition to my studies, I currently have the pleasure of volunteering at the Sweetbriar Nature Center, a wildlife preserve and animal rehabilitation center. Sweetbriar is a magical place, where one can’t help but feel in touch with nature and at peace. The site is situated on 54 acres of varied garden, woodland, field and wetland habitats on the Nissequogue River. It is one of the only places on Long Island that rescues and rehabilitates birds of prey, including a bald eagle. My work, however, is with less “exotic” creatures, our farm animals (who are still marvelous in their own right).

Every Friday morning, I drive down to the barn to feed and care for our rehabilitated farm animals. This includes a goat, two ducks, several chickens, two roosters, three rabbits, and two pigs. 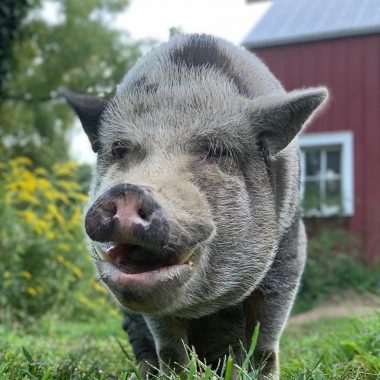 The pigs’ names are Styx and Bricks. A mix between pot-bellied and another unknown breed (we call them “pot-bellied mutts”), they were rescued from a roadside petting zoo and have been at Sweetbriar for the past four years. These two boys are some of the most humorous, intelligent creatures I have ever met. As soon as I arrive, they hear me and wake up from their restful slumbers in their individual wooden houses. They slowly drag themselves up and out to say hello to me. They know the lady who feeds them is here! Their loud snorts always make me giggle. What many people don’t know is that pigs wag their tails when they are happy to see you, just like a dog. Also, pigs love to munch on flowers in the grass. Until I started working with Styx and Bricks, I didn’t know pigs were such nature lovers. Bricks is especially demanding for flowers to snack on and head scratches. He will squeal with delight for both – a noise that is pretty hard to ignore.

I take great care to make sure their meals have all of the fresh veggies, flaxseed, and glucosamine they need to be healthy. Sadly, these boys did not have the best life before, and their bodies still show it. They were kept in inhumane conditions. They were fed a poor diet, which lead to becoming overweight and developing osteoarthritis. When the roadside zoo was shut down, the pigs and other animals were abandoned. They were extremely malnourished and sick before finding a new home at Sweetbriar. It breaks my heart when Bricks has a hard time standing up to eat his food. Sometimes, he has to stay on his knees because it is too painful to stand on his hooves. Another thing people might not know – pigs cry tears like a human when they are in pain. Bricks and Styx are also easily started– even by a chestnut from a tree falling into their pen. Imagine the terror and sadness farmed pigs must feel if something as benign a falling chestnut can scare them.

Styx and Bricks are incredible, sensitive animals. They deserve our protection and our care. I am positive that if more people knew how special they are, they would want to do more for farmed animals.

The fact is, animal law and farmed animals are not things people discuss in our society regularly, even though it affects us all in many ways. Animal agriculture is the leading cause of climate change. Animal products in our diet are unhealthy and is a leading cause of heart disease and diabetes, which puts a massive strain on our medical system. Still, high-speed pig slaughter and inhumane conditions at factory farms are not things you hear about on the news. It seems that only a small part of our population aware of what happens to farmed animals like Bricks and Styx, and the havoc these factory farms wreak on our ecosystems, water, land, and air. 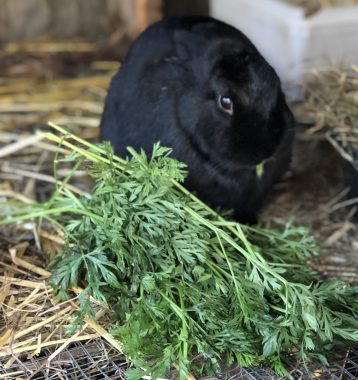 I believe the solution to getting more people interested in the rights of farmed animals is a three-pronged approach. First, we need more local programs like Sweetbriar and student ALDF chapters to educate people about animals like Styx and Bricks. Secondly, we need to keep fighting for better laws, which the ALDF is doing. And the third part of the solution is to recalibrate the dialogue about climate change. I believe that through education about how factory farming affects the climate, more people will pay attention to the problem.

Climate change is in the news every day. It is a popular and important topic. This year, Congress attempted to pass the unprecedented Green New Deal. The world watched as Greta Thunberg, a 16-year-old climate change activist, confronted global leaders at the 2019 climate action summit about taking more action to preserve the planet. Conscientious citizens protest in every city to raise awareness about climate change. The urgency is palpable. But the dialogue is missing a key element, something that affects the climate more than anything else. People don’t seem to be talking about farmed animals, a major factor in healing the planet.

As a society, we are not talking about climate change and animals together as much as we need to be. Perhaps that is because climate change discussions are environmental and economic discussions. Climate change seems to revolve around the use of natural resources like fossil fuels and weighing the cost of industry against harms to the environment. We hear about wind turbines, solar panels, and electric cars. We hear about the regulation of emissions and taxing corporations who pollute. But we never hear about factory farming on the six-o’clock news, even when it comes to the climate crisis.

Animal agriculture affecting the climate is not a new issue, yet it is a relatively unknown one. Project Drawdown and the United Nations both say that a shift away from animal products should be part of the solution to the climate crisis. In September, there was Long Island Global Climate Action rally in Hauppauge, right around the corner from my law school. The speakers were all quite passionate, and yet, nobody brought up farmed animals as being a factor in the climate crisis. But animal agriculture is responsible for 18 percent of greenhouse gas emissions, more than the combined exhaust from all transportation.

Animal law discussions involve emotion, and it makes people uncomfortable. Perhaps that is the first hurdle. The second is, people do not like change. Our country was founded on the idea that there should be a “chicken in every pot,” and that meat is a staple in our diet. But for the sake of our bodies, the planet, and animals, we need to take steps towards a more humane, plant-based diet. And, we need to talk about animals as the sentient, emotional beings that they are. Animals have their inherent rights. We have evolved to no longer look at animals as property, but as beings who deserve respect and care, and laws to protect them from greed and abuse. Anyone who met Styx and Bricks would see this for themselves.

When another student, Katelyn Leyva, and I decided to start an Animal Legal Defense Fund student chapter at Touro Law Center this year, I was worried that nobody would come to our first meeting. I was wrong. That evening, eleven interested students showed up, taking time away from studying to talk about animal law. Topics of interest included animals as legal persons, learning about the wildlife of Long Island, and factory farming. In support of Speak Out for Farmed Animals Week, we screened “Cowspiracy: The Sustainability Secret.” Both students and faculty were extremely interested in what the documentary had to say. Already, we were changing the dialogue about animal law and climate change by addressing them both together.

The conversation about climate change needs to be a conversation about animal law. I hope that as the new decade is upon us, these divergent areas become synonymous.  It is clear that if more people knew that animal agriculture is the leading cause of climate change, more people would include it in the dialogue. I believe they would make better choices about what to include in their diets. The paths of animal law and climate change are not separate. If you’re traveling down one, you cannot ignore the other.

Pigs like Styx and Bricks are subjected to horrible and cruel acts every second of every day. Sentient Media estimates that more than 200 million animals are killed for food around the world every day – just on land. Yet, as of today, no federal laws exist to protect them. As students, attorneys, and citizens, we all want good laws. We want laws that allow us individual freedoms, laws that protect our lives and livelihoods, and laws that control the malevolent elements of society. It is fair to say that most people would want to see laws that protect animals like Styx and Bricks from harm and to ensure future generations have a healthy planet for years to come. It will take being brave and doing what is unpopular sometimes. But I am confident it can be done, and I hope that 2020 is the start of a new era in animal law, for the sake of non-human animals and us all.