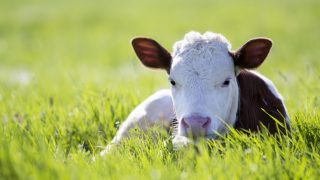 Bailey Frank, 1L at Duke Law school, is the winner of the 2019 New Voices in Animal Law Writing Contest! 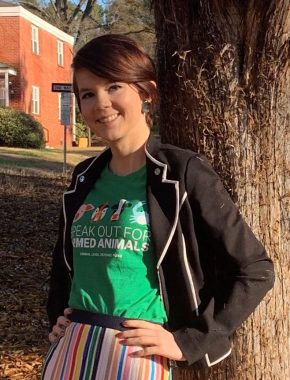 Mary-Bailey (Bailey) Frank, is a 1L at Duke Law school. Bailey became interested in animal rights during her undergraduate years at Georgetown University, where she helped lead the student group Animalia: Animal Rights at Georgetown and interned with the Humane Society Legislative Fund. After graduating college, she spent two years teaching in Mississippi through the Teach for America program, but she ultimately came to realize her heart belonged to the animal rights movement. She enrolled in Duke University School of Law to pursue a career as an animal rights attorney, and she currently serves as the 1L representative for Duke Law’s Student Animal Legal Defense Fund chapter. Bailey looks forward to working in the animal law field and fighting for the day when all animals are the afforded the dignity and respect they deserve.

An Image of Hope: The End of Animal Exploitation

My journey to veganism began in 2015 after some independent research into practices on factory farms, a quick snippet of the documentary Earthlings, and a thorough reading of Peter Singer’s Animal Liberation. From then on, whenever I thought about meat or dairy, images of animal cruelty flashed in my head. Learning about the brutality towards animals was all I needed to realize I could not be a part of an entrenched system of violence. For the first year of my veganism, the images motivating me to make change for animals were violent and destructive. I began struggling with feelings of immense sadness and anger. When I looked around and saw all the ways animals were used in our society, I felt hopeless.

That all changed when I met Elliot and Winnie. They gave me a different image to focus on: one of hope and love. Elliot was a cuddly baby calf, only a few months old, who had been rescued with his mother from a farm. Winnie was a piglet with floppy ears and an immense curiosity for shoelaces. I met them both at Poplar Spring Animal Sanctuary, in Poolesville, MD, and it was the first time I had ever been so close to “farm” animals. I was fortunate to get a photograph of my first encounter, and I will never forget seeing Winnie bounding over the hills, running as fast as her little legs could carry her, ears flopping in the wind. 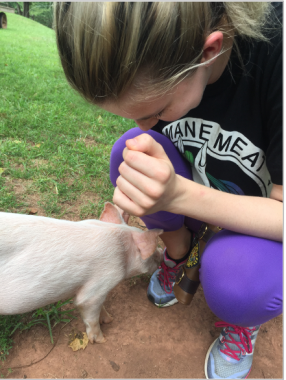 There were so many rescued animals at Poplar Spring: turkeys, chickens, horses, goats, sheep, and even a friendly squirrel named Sigmund. The animals were cared for by volunteers and curious visitors, and the sanctuary owners knew every single animal by name. The animals were individuals with personalities, and their differences were respected and acknowledged. Poplar Spring was a place of peace, love, and compassion in the most authentic sense of the words.

When I got to hold Winnie and hug Elliot, I saw, for the first time, what it would mean to end animal suffering and exploitation. It wasn’t just a dream for the future. It was real, and it was happening right before my eyes. I left Poplar Spring that day knowing that animal exploitation is wrong, not merely because it causes pain and suffering, but because it deprives all animals of this real opportunity for peace and happiness.

Knowing about the animal cruelty that goes on every minute of every day in our society can be emotionally draining and even traumatic. Understandably, many of my friends exemplify the stereotype of the “angry vegan” because bearing witness to a violent truth can be isolating and difficult. Acknowledging the truth of what animals currently experience is important so that we may advocate for them. Yet, it’s also important that we have a positive vision for the future. It’s easy to throw around words like “compassion” or “freedom,” but I did not know what I was really fighting for until I witnessed it at Poplar Spring. 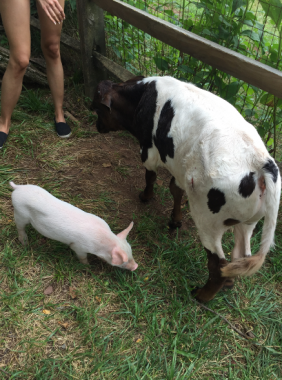 I have now been vegan for almost five years. In that time, I have seen many more images of animal cruelty, but I have never forgotten Winnie and Elliot. While billions of animals are abused and slaughtered every year, I know there is also a place where they are treated with kindness and respect.

As veganism enters the mainstream psyche, it is imperative that animals like Winnie and Elliot stay at the forefront of our minds. Although healthy “plant-based” diets and “environmental sustainability” movements can be effective at reducing the number of animals killed for food, a vision of the difference that could be made for animals is equally as important. When people hear “cow,” they should not think “milk.” When people hear “pig,” they should not think “bacon.” Exposing cruel practices matters because truth matters, but the question remains: If we all stop eating animals, what happens to them? Winnie, Elliot, and all the rescued animals at Poplar Spring embody the future we are fighting for: animals flourishing in communities designed to meet their needs, living free from unnatural cruelty and distress.

An acknowledgement of animal rights in the law is not going to happen overnight. Many people have asked me whether I feel like I’m pursuing a fruitless goal given all the legal obstacles. My response is two-fold. First, the work that legal advocates do, and that I hope to contribute to, often involves defending animals who have been subjected to extreme acts of violence and injustice.  A case may get thrown out on standing, as often happens, but these animals need and deserve an advocate in court. Second, with places like Poplar Spring in the world, the battle is never fruitless. As an aspiring animal rights lawyer, I am part of a movement to fundamentally change how people treat and, ultimately, perceive animals. Winnie and Elliot are living proof that pursuing legal rights for animals isn’t just about working against cruelty, it’s also about working for the peaceful future that I know, and we should all know, is possible.