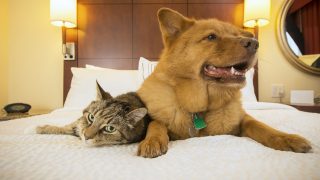 HF 737 relates to the regulation of persons involved with animals other than livestock and certain wild animals, providing for criminal offenses and court orders associated with animal mistreatment, and including penalties.

The legislative drafters, as well as advocates, relied on the Animal Legal Defense Fund’s ranking reports and its detailed summaries of areas where Iowa needed to make improvements to ensure the bill addressed the state’s biggest shortcomings. Additionally, Animal Legal Defense Fund staff worked closely with advocates and local organizations to review bill language and suggest amendments to ensure the legislation was as impactful as possible.

Among the key changes is the removal of an exemption that meant people who actively abused their own animal or who acted with the consent of the animal’s guardian could only be charged with a lesser crime. It expanded the requisite mental state for abuse from “intentionally” to “recklessly,” meaning a prosecutor no longer has to prove a person intended to harm their animal, but instead that they acted with willful or wanton disregard for the risk of harm. The bill also removes the requirement in an animal torture case for the prosecutor to prove the defendant acted with “sadistic or depraved intent.” It furthermore includes more comprehensive definitions of standards of care in the neglect provisions and adds that the animal’s guardian must provide a sanitary environment, ventilated shelter, necessary grooming, and necessary veterinary care. It also requires courts to order psychological evaluation and, if necessary, treatment for any juvenile adjudicated for animal cruelty and any adult convicted of aggravated cruelty or torture, and explicitly permits the court to order psychological evaluation and treatment for all other animal cruelty offenders.

While there is still considerable room for improvement, the law is an important step toward better protecting Iowa’s animals.

Find out where your state ranks in our annual rankings report.