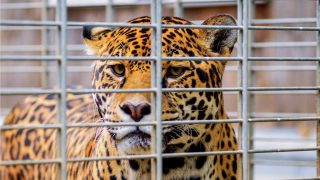 The Traveling Animal Protection Act bans the use of certain wild animals, including big cats, bears, nonhuman primates, and elephants, in entertainment performances in circuses and traveling shows.

Wild animals in circuses spend most of their days in cramped, barren cages, deprived of the ability to engage in their natural behaviors. Forced to perform frightening and sometimes painful tricks, they are typically denied anything that might satisfy their complex physical, behavioral, and emotional needs.

As the public grows increasingly aware of the cruelty inherent in forcing wild animals to perform in circuses and traveling shows, more states and cities are moving to restrict or prohibit their use. When Colorado’s Traveling Animal Protection Act became law, six states and nearly 150 other localities in 37 states had already passed various restrictions governing the use of wild animals in circuses and traveling shows — including Boulder, Colorado.

Senators Joann Ginal (D-14) and Rachel Zenzinger (D-19) and Representatives Meg Froelich (D-3) and Monica Duran (D-24) served as the prime sponsors for The Traveling Animal Protection Act. . The bill was referred to the Senate Committee on Agriculture & Natural Resources and House Committee on Agriculture, Livestock, and Water, passed in the Senate and House, and signed into law by Governor Jared Polis on May 14, 2021.