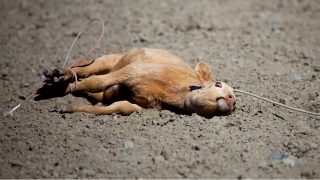 Prohibits certain acts, including “calf roping,” in rodeos (A.2124)

Rodeos are dangerous and cruel. The horse, bulls, steer, and calves forced to participate in these events routinely suffer broken ribs, backs, and legs, torn tails, punctured lungs, internal organ damage, ripped tendons, torn ligaments, snapped necks, and agonizing deaths. Injuries and deaths are not limited to rodeos themselves. For instance, during practice sessions, a calf may be roped repeatedly, until the calf suffers injuries that require her replacement.

A.2124, sponsored by Assemblymember Linda Rosenthal (D-67), would prohibit some of the cruelest elements of rodeos. Specifically, A.2124 prohibits persons in a rodeo from  (1) engaging in “calf roping,” where a calf is captured by a lasso, (2) using electric prods, (3) using “flank straps” or “bucking straps” which refer to straps or ropes cinched around the stomach of a horse or bull which cause the animal to buck, and (4) using spurs with a fixed or sharpened rowel, which refer to sharp prods fixed to the heel of a person riding an animal.

Calf-roping is a rodeo event in which a rider chases a calf, lassos her by throwing a rope around her neck, dismounts, throws the calf to the ground, and then ties three of her legs together with rope. Calf-roping is not only intensely frightening and stressful for calves, it’s dangerous. Calves endure bruised and broken ribs, choking, and damage to their windpipe and neck.

Electric prods are used to make animals perform. The “hotshot” is an electric prod that scares an animal into displaying abnormally dramatic reactions through intense pain. Other tools include metal spurs and “bucking straps” that burn the animal’s abdomen and groin area and cause him to “buck” and can lead to back and leg injuries.

Travel between rodeo events is punishing, as well. Animals are often transported over long distances in hot and overcrowded trucks and trailers. The official rules of the Professional Rodeo Cowboys Association permit animals to be confined during transport for as long as 24 hours without being fed or watered.